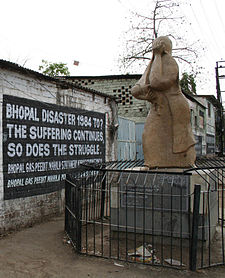 Kolkata–Over three decades after the horrific Bhopal gas tragedy, there are still unmet eye-care needs among the survivors of the catastrophe, considered the world’s worst industrial disaster, say experts.

“Some of these needs are similar to those elsewhere in India (e.g., uncorrected refractive error and cataract), but there are also needs unique to this cohort (e.g., dry eye-like symptoms) that have persisted long after the disaster,” optometrist Prem Nandhini Satgunam told IANS.

An estimated 26-40 tonnes of methyl isocyanate (MIC) gas leaked from the Union Carbide plant in Bhopal on December 3, 1984, killing at least 3,000 people within 72 hours, and causing long-term morbidity and mortality among many of the estimated 569,000 people exposed to the gas.

Complaints related to vision or eyesight, such as burning and watering, were predominant among the survivors soon after the gas disaster.

“There was a paper that came out soon after the disaster in Lancet on the long-term health effects of the exposure. Till up to 1992, long-term vision changes were documented in an Indian Council for Medical Research (ICMR) report. But the interest sort of died down after that,” she said.

So in March 2012, a long 28 years after the disaster, Satgunam and Leonid Chindelevitch, who had then completed their studies in the US, conducted a non-invasive vision screening for disaster survivors in Bhopal.

The duo, part of the MIT (Massachusetts Institute of Technology) student chapter of “Students for Bhopal”, visited a local community clinic set up by a trust after the gas disaster.

This clinic treats disaster survivors free of charge and offers both Ayurvedic and Western medicine for a variety of health conditions.

“So we announced that whoever was interested in a screening could avail themselves of the vision screening service. As many as 59 patients enrolled and a majority of the patients in our sample were women over 40 years,” Satgunam said.

The researchers analysed the results from 48 patients who had a documented history of gas exposure.

The commonly reported symptoms were vision difficulties (in about 30 of those screened), watering (in 21 patients) while as many as 16 reported headaches.

“Thirty patients needed spectacles, 30 had cataracts and 17 had pinguecula,” says the study published in May in Current Science.

A pinguecula is a common type of conjunctival degeneration in the eye. It appears as a yellowish, slightly raised thickening of the conjunctiva on the white part of the eye (sclera), close to the edge of the cornea.

Satgunam notes pinguecula was not noticed in earlier studies of the gas-exposed people in Bhopal but as this is a degenerative disorder of the conjunctiva, it may not have occurred immediately following exposure to the gas.

“It is not clear if exposure to MIC makes the conjunctival tissue more susceptible to developing pinguecula. We need more studies on that. Our data provides a basis to plan more studies because what we have highlighted here is that even three decades after the disaster, much remains to be done for this under-served population, at least in terms of vision-related issues, said Satgunam.

In addition, heavy-metal contamination in soil and water in and around the area is a major concern.

“Heavy metals such as lead and mercury can have toxic effects on the eye. The water contamination may therefore provide additional risk factors associated with the eye conditions, independently of gas exposure,” said Satgunam.

The ocular conditions found among the survivors of the disaster in Bhopal are only one of many public health concerns affecting this population, she stressed.

“A more regular eye-care unit needs to be set up in the clinic serving this cohort in order to reduce preventable blindness and provide symptomatic treatment. Better government interventions and better public health policies need to be put in place for the survivors of the disaster,” she added.