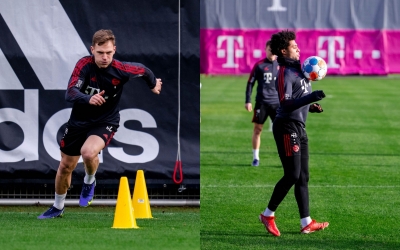 Berlin– The growing number of infections among footballers threatens to turn competition in several European leagues into a game of luck.

This season’s tight international schedule might have to be restructured as cancelled games need to be repeated later in 2022. But the Qatar World Cup in November and December and the Nations League next summer don’t leave space for alternative dates.

Regulations demand a kick-off when 15 healthy players are available. Several clubs had to rely on amateur or second-team players, Xinhua reports. While in the English Premier League several encounters had to be suspended, the German Bundesliga faces an unpredictable start of the second half of the 2021/2022 season this weekend.

Bayern Munich’s increasing troubles seem only the tip of the iceberg in German football.

Paris star Lionel Messi returned with a positive test from his Christmas trip to Argentina.

Girondins Bordeaux suffered from an early French Cup exit after 21 players were sidelined due to infection.

German second division side Werder Bremen skipped its mid-season preparation training camp due to infections shortly before taking off to Spain after Fortuna Dusseldorf and Schalke 04 decided to stay at home.

2020 treble winner Bayern Munich announced six infected players next to an assistant coach and three physiotherapists ahead of their game against Borussia Moenchengladbach on home soil on January 7.

The Bavarians list could grow when doubtful cases such as Leroy Sane, Josip Stanisic, and Dayot Upamecano turn into positive infected after further testing.

Bayern coach Julian Nagelsmann shifted the teams’ training start from Monday to Tuesday to allow an extended series of tests.

On top, Nagelsmann is missing striker Eric Maxim Choupo-Moting and Buona Sarr as both attend their home country’s national teams for the Africa Nations Cup.

Reports speak of 13 of the 18 first-tier clubs in Germany suffering from various cases in either team or staff. Nine of Bayern’s players currently stay in quarantine, Leipzig reports seven.

Reports speak of a possible suspension of Bayern’s game against Moenchengladbach in case of further positive tests. (IANS)