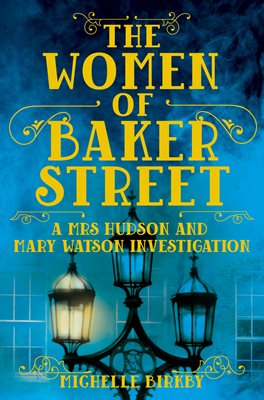 On the foggy streets of gaslit, late-19th century London, evil is again afoot. Inmates of a women’s ward in a leading hospital are dying in suspicious circumstances, while boys from the street are disappearing and some reappearing in a mysterious, nocturnal gang. Probing these cases and their connections are investigators from Baker Street — but not the ones expected.

In the second instalment of her series utilising two of the most vital but neglected figures — both women — from the Sherlock Holmes canon, crime writer Michelle Birkby spins another dark tale of obsession, love and relationships that well captures the mood of the original and of the times.

The principal character (and narrator) is Mrs Hudson, Holmes’ “long-suffering” landlady, who throughout the canon, has never been even described or given a first name. At her side is Mary Watson, the wife of Holmes’ close companion, in a more feisty and determined role than she has originally (save her key part in “The Sign of Four”).

The story begins in October 1889 when Mrs Hudson suddenly collapses — soon after Holmes and Watson’s return from investigating the case that became famous as “The Hound of Baskervilles” — and is taken to hospital for surgery and then admitted to a special ward, courtesy Dr Watson’s influence.

Waking up in the dark after her operation, she sees what seems to be cold-blooded murder of a fellow patient by a shadowy presence. She initially dismisses it as a nightmare due to tension and the effects of the anaesthetic and morphine dose, despite learning that a woman did die there. But then she learns the ward, presided over by a strange sister who always stays overnight but never checks or interacts with the patients, has seen more deaths than can be expected — including some who didn’t seem that ill.

Then the other inmates are a singular bunch, some near-regulars and some not what they seem. And when Dr Watson tells her of the misgivings about the ward and requests her to observe as much as she can, her interest is fully piqued.

Meanwhile, Mary Watson is investigating the cases of disappearance of children, whose going missing will not set off alarms, after the fact is brought to her notice by Billy, a member of the Baker Street Irregulars. And then there are the rumours of the “Pale Boys”, whose appearance on certain streets of the metropolis in the night may mean death for their unwary beholder.

Has this rumour any basis and are there any sinister forces behind these two cases? Join Mrs Hudson and Mrs Watson as the two realise the lethal connection through a spate of wrong trails and chilling and hazardous situations, in a dark hospital ward, an abandoned house, a river island and finally in a deserted riverside area — where let alone the forces of law and order, reason and civilisation seem far away.

And then memories, scarcely unpleasant, from their first case still lie heavily on both of them — while Inspector Lestrade pursues it with his usual tenacity, even trying to get Holmes’ help.

This second instalment, which the author tells us was borne out of her own hospitalisation and wondering if murders could be carried out in a place no stranger to death, is not only an intriguing and haunting mystery, but also helps to add to the considerable depictions of Holmes’ and Watson’s world. And that too by those closest to them.

Birkby also ensures her own characters do not become auxiliaries by the appearance of the principal characters, who are available to advise and counsel but kept from direct involvement.

Though this can be read stand-alone too, the references to the earlier adventure and a chilling realisation at its end make it rather advisable to go through “The House at Baker Street”. And if you like them, be assured more are on their way. (IANS)