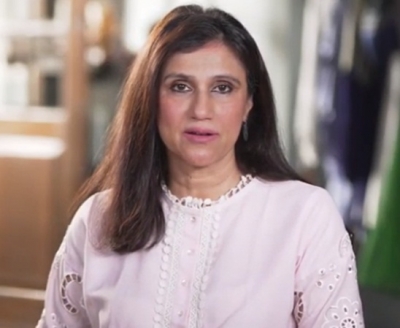 New Delhi– Just in time for World Environment Day celebrated annually on June 5, Celebrity designer Rina Dhaka says that leather is out in the new public service announcement (PSA) by People for the Ethical Treatment of Animals (PETA) India.

The PSA exposes how the leather industry harms the planet and sentences animals — including cows, pigs, goats, sheep, ostriches, snakes, crocodiles, and dogs, among others — to excruciating deaths after a lifetime of pain and misery. The video was shot by Deepak Arya.

“I love fashion. I also love animals and the planet. And that’s why I don’t use leather in my designs,” says designer Rina Dhaka in the PSA. “If you buy leather, remember: there’s no easy way to tell whose skin you’re really in …. Vegan leather and other leather-free options can be found just about anywhere you shop. So please, be beautiful in your own skin. And let animals keep theirs.”

As Dhaka notes, leather is the most polluting material in fashion. Raising animals for their skin requires massive amounts of land and other resources. More than 90 percent of the Amazon rainforest that’s been destroyed since 1970 is used for rearing cattle for meat and leather production.

In India, animals used for leather are often crammed into vehicles in such large numbers that their bones break. If they survive the journey to the slaughterhouse, their throats are typically slit in full view of other animals while they’re still conscious.

“Behind every leather bag, shoe, and coat is a sensitive animal who suffered a painful death,” says Senior Media and Celebrity Projects Coordinator Monica Chopra. “PETA India is delighted to work with Rina Dhaka to encourage everyone to embrace innovative vegan fabrics.”

Dhaka and 32 other prominent Indian designers pledged to go leather-free after PETA India and Lakme Fashion Week appealed to them to ditch the material for animals and the planet. (IANS)