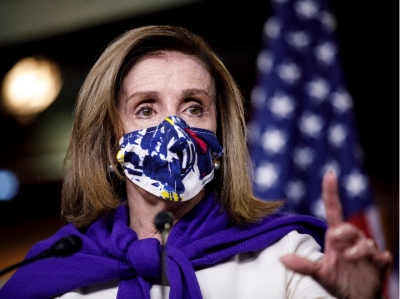 “In terms of where we are, I have said already we have 90 percent of the bill agreed to and written. We just have some of the last decisions to be made,” Xinhua news agency quoted Pelosi as saying on CNN on Sunday night.

When asked if Democrats will have a deal by the time Biden leaves for Europe at the end of the week, Pelosi said that “I think we’re pretty much there now”.

“It’s just the language of it,” she said.

Biden has been pushing Democrats to reach an agreement on his social spending plan ahead of a self-imposed deadline of October 31.

“It’s all about compromise. You know, ‘compromise’ has become a dirty word, but bipartisanship and compromise still has to be possible,” Biden had said during a CNN town hall on October 21.

“If we can’t eventually unite this country, we’re in deep trouble,” he said.

Democrats have agreed to cut the price tag of the social spending plan from the original $3.5 trillion to about $2 trillion in order to win support from key moderate Democratic senators, Joe Manchin of West Virginia and Kyrsten Sinema of Arizona.

“It is less than what was projected to begin with, but it is still bigger than anything we’ve done in terms of addressing the needs of American working families,” Pelosi said, adding the point is to reach a goal.

Pelosi’s remarks came as Biden is meeting with Manchin and Senate Majority Leader Chuck Schumer on Sunday in a bid to finalise the social spending plan, according to Bloomberg News.

The White House and Manchin still differ on the terms of the top-line spending level for the bill, which creates and expands programs aimed at helping women, minorities, children and the elderly, Bloomberg reported.

Democrats have said they hope that an agreement in principle on the social spending bill will allow the House to vote this week on a separate physical infrastructure bill, as the current authorisation for highway funding expires on October 31. (IANS)