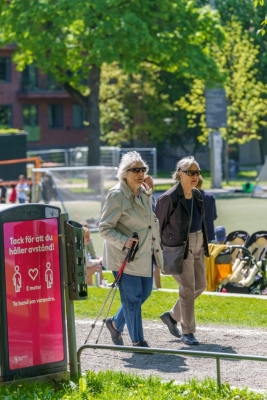 Stockholm– An estimated 300,000 people in Sweden suffer from an impaired sense of smell due to Covid-19, the country’s national TT News Agency reported.

According to the report on Sunday, queues were still long outside clinics that offer treatment for the condition in the country.

With around 10 million inhabitants, Sweden has only two such clinics, of which the newest opened in September at Karolinska University Hospital in Huddinge near the capital city of Stockholm, Xinhua news agency quoted the report as saying.

According to the latest statistic released by the Swedish Public Health Agency, 1,165,996 coronavirus cases had been confirmed since the pandemic started early last year.

The country has seen a slight increase in the number of new cases since the restrictions, such as limited number of participants in public spaces and restaurants, were lifted on September 30 together with the advice to wear face masks and if possible work from home, but there are currently no plans to tighten restrictions.

However, rules about testing are still in force, although will be relaxed on November 1, and those who have not been vaccinated are advised to take the same preventive measures as before.

Meanwhile, 84.7 per cent of the population aged 16 and older have received at least one dose of a Covid vaccine, while 80.1 per cent were fully inoculated. (IANS)