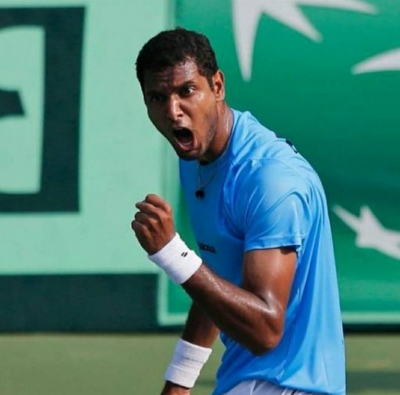 New Delhi– India’s ace tennis player Ramkumar Ramanathan will be up against Denmark’s lowly-ranked Christian Sigsgaard in the first singles match of the Davis Cup in the World Group Play-off 1 at the Delhi Gymkhana Club on March 4.

Sigsgaard is currently sitting on 824th rankings in singles while 170th-ranked Ramkumar is much above his opponent. In the second singles, 590th ranked Yuki Bhambri will meet Mikael Torpegaard who is currently placed on 210th in the world rankings.

On the second day of the tie, India’s ace doubles players Divij Sharan and Rohan Bopanna will go up against Johannes Ingildsen and a former Wimbledon men’s doubles champion Frederik Nielsen.

In the reverse singles, Ramkumar will face Mikael Torpegaard while Yuki will be up against Sigsgaard on Saturday.

Commenting on the draw, Denmark captain Frederik Nielsen said the draw was favourbale for them as they wanted to put the 24-year-old Sigsgaard in the first match. He added that the team is upbeat against the hosts and it will be a good match on the first day.

“Christian has is doing good, he is in great form, he is very tricky on the court, so let’s see what he has on the first day f’r us. I don’t want to predict anything now but can assure you a good match on the first day. We believe that we also have an advantage, but nothing to take away from India. They are playing in home conditions,” he added.

However, India’s non-playing captain Rohit Rajpal said that it is a good draw as Ramkumar can have the best chances against Sigsgaard.

“As you know, we are playing on grass. We know the conditions better, which gives us a slight edge. Ramkumar has been practising a lot here. He knows the track very well. Overall it will be a good match for us. We have a better chance in the first match, so I’m looking forward to the matches,” he said. (IANS)