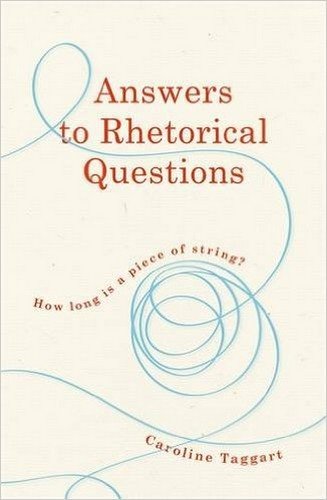 Questions may seem incomplete without answers but responding to some particular ones, say “To be or not to be?”, “How many roads must a man walk down before you call him a man?”, or even “You talkin’ to me?” (for Robert De Niro fans) may seem pointless, if not impossible. Is it?

Theoretically yes, for these particular ones and their ilk belong to a class known as rhetorical questions, or those which don’t “expect or require an answer” due to their use for dramatic effect.

But that doesn’t still stop Caroline Taggart from dealing with a raft of them, drawn from all forms of culture, ranging from philosophy to TV serials, science, religion, psychology, economics and more with ready and rapid wit and keen insight.

Rhetorical questions, says freelance editor-turned-author Taggart, are all around, from the Bible (right from the beginning when Cain poses a rhetorical counter-question: “Am I my brother’s keeper?”) to popular songs, and range from the “deep and meaningful” to the “anxious” to the “frivolous”.

However, “what they have in common is that someone, somewhere, has thought them worth asking and — by definition been left without a satisfactory response”, she says, adding she has tried to remedy the deficiency in a “sensible, no-nonsense way”.

“After all, when it comes to the crunch, do you really want someone to compare you to a summer’s day? How many beans do you think make five? Does your brother need a keeper?” she asks.

To take the questions listed first, we find that for the first — from Hamlet’s famous soliloquy, which can be restated in contemporary language as “Is it nobler to put up with the crap that life slings at us or to decide that enough is enough?”, a million people a year, as per WHO, go for the second option. However, Taggart goes on to note how Hamlet himself notes the lack of information about its aftermath as have done several people since.

Similarly, the answer to the question posed by Bob Dylan in the beginning of his celebrated anthem could work out to about 5,222 km “which is probably quite a lot of roads, unless your road happens to be, say, the Pan-American Highway, when you will barely have covered a fifth of it”.

Taggart goes on to deals with over 10 dozen more in the same vein.

Dividing her work into nine sections, she begins with health, science and law, goes on to ask “Do you know the way to San Jose?” covering geography, science and nature, and then “Who wants to be a millionaire?” on those related to business to finance.

“Is the Pope a Catholic?” with questions of the meaning of life is the largest section, followed closely by the one with matters of social intercourse. The remaining four sections deal with literature, history and politics; domestic life; food and drink; and last but certainly not the least, “Will you still love me tomorrow?” dealing with sex and romance.

The answers may range from short (to “Where do I begin?”, the helpful answer is “Try page one”) to longer but as this example shows, the wit is always there, along with some serious advice or counsel provided where needed but quite non-didactically.

One small shortcoming is that she does not always indicate the origin of the question in question, and as its expanse covers a wide area from Freud to My Fair Lady, the Bible to Bugs Bunny, and Shakespeare to Simon and Garfunkel, this can be a little problematic for those whose grounding in these varied subjects is a little deficient.

What are we to make of the book?

It should not be dismissed as merely of academic and pedantic curiosity but used to understand one very important lesson, in view of the populist demagoguery on the ascent around the world, that rhetoric is not always admirable or beneficial and has to be countered with hard facts where it affects our livelihoods, rights and choices.