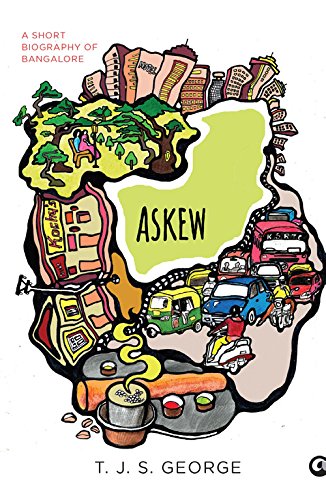 Often referred to as the Silicon Valley of India for being the hub for information technology (IT) companies in the country, the city of Bangalore (now Bengaluru), according to the arguments put forth in this book, has lost its traditional charm at the hands of modernity and enterprise.

“Askew” may be a rather unconventional title for this scholarly work, but the author’s attention to detail in chronicling the journey of Karnataka’s capital, “from a paradise for pensioners to an El Dorado of the future”, will live to tell the many unknown tales of the old city.

The author’s focus on those who have contributed to the city — in ways both good and bad — vividly narrates the stories of the planners, writers, intellectuals, actors, politicians, entrepreneurs and their children, theatre artists, the IT sector, hoteliers and even the commoners.

“Looked at through the lens of a Wordsworth poem,” George writes, “Bangalore in its youth began in gladness but thereof came in the end despondency and madness.”

After careful research and citing historical evidence, the book presents a blow-by-blow account of Bangalore’s rise to modernity and, at the same time, its continued march towards losing the age-old charm associated with the city.

This is not a recent phenomenon. Even in the 1980s, when George “embraced the glorious city”, he often heard the earlier residents complaining of similar changes.

“They would tell me how in the 1950s telephone numbers were in easy four-digit configurations, how the city bus service went to outlying areas…, and how an air ticket from Bangalore to Bombay cost Rs 285.”

These imageries fascinated George, but he thought it was unfair of the old-timers to imply that the “city’s charm” was gone. In his Bangalore, “the traffic was civilized, the parks were green and the trees full of birds”.

The most significant argument that George makes is that even though Bangalore had etched a narrative of growth throughout history, the speed at which IT altered its sociology and economy made the city “unbearable”.

“The old agreeable Bangalore was now replaced by an aggressive Bangalore where no one had time for his neighbours. Everyone was chasing success as measured by a new consumerist value system,” asserts George, while also narrating the horrors caused to the city’s ecology.

Why did modernity and enterprise make Bangalore unbearable?

Kempe Gowda, the fabled founder of Bangalore, was given two instructions by his mother in the 1530s before setting out to build his dream capital: “Keregalam kattu, marangalam nedu (Build lakes, plant trees)”. Gowda created a hundred lakes and lined the pathways with wide, leafy trees.

Fast-forward to modern times. George, with visible sarcasm, regrets that politicians and land dealers of today were born to “different kinds of mothers” as, in just about three decades, 2,000 hectares of lakes were filled up and, in the late 2000s alone, 50,000 trees felled.

The short book makes for a fascinating case study on what Bangalore used to be and what it is today. (IANS)