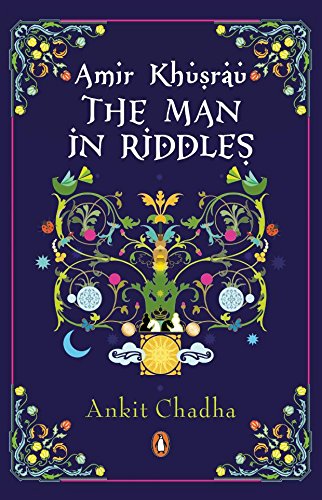 He was a man of many parts — warrior and counsellor to sultans, prime disciple of an eminent Sufi saint, poet, historian, a man credited for two popular musical forms, two styles of classical music and two musical instruments, for pioneering a composite culture and language which we still speak. Which should we use to present Amir Khusrau to contemporary generations?

How about instead a simple — yet complex — and common form of oral communication that Amir Khusrau was himself involved in refining and popularising?

And it is the “paheli” (riddle) that writer and story-teller Ankit Chadha chooses to tell us of the life of Ab’ul Hasan Yamin ud-Din Khusrow or Amir Khusrau (c. 1253-1325).

Noting how in India, “stories, songs, epics and sometimes even entire histories travelled from generation to generation only through word of mouth, or what we call the Â‘oral tradition’, before they were written down”, the author says that Khusrau’s legacy too was passed on this way, “offering us glimpses of his larger-than-life personality” — a man of multiple talents — who juggled many roles besides that of a poet.

In the same way that Khusrau usually composed verses to describe each collection of poetry he wrote and “when taken together, these introductory verses can form an ode or a poem of praise”, Chadha says he has collected a number of riddles, attributed to him, to serve as “an introductory verse to a part of Khusrau’s personality or thought process, the entire thread of riddles thus forming a story on the life of this phenomenal man”.

He notes that these riddles are a game with their own answer, or rather parts of their answer, quite apparent in the words and their interplay if one looks carefully at them both as constituent parts and as a whole. Carefully handpicking 20 such riddles, Chadha contends that these, apart from telling us about the prominent contours of Khusrau’s life, also display the intrinsic “duality” of his personality and poetry, or “the way he balances the physical and the metaphysical, the real and the unreal, light and darkness and so on”.

The very first example is proof enough of Khusrau’s art in this respect.

“Sab sakhiyon ka piya pyara/Sab mein hai aur sabsoon nyara/Waaki aan mujhe ye bhaa/Jaaki hai bin dekhi chaa (Deeply precious to our hearts/Deep in us, but stands apart/This I love, of whom I speak/Him I see not, but Him I seek).” Can you figure it out?

It also sets the pattern — Chadha presents the riddle — in English transliteration and translation on opposing pages, and then, overleaf, provides the answer with some specimens of mesmeric artwork by Urmimala Nag.

Some of Khusrau’s riddles may seem to have easy answers, but will evoke admiration for the masterful way he presents them (as well their translations by Chadha): “Its victims are neither scarred nor slain/yet each one is split in twain/If you seek to riddle me this/Facing it won’t be amiss)”.

He also impresses by the range of subjects they could touch on — tickling for one, and how he could use vivid imagery to depict an everyday object — at least as far as the Indian subcontinent is concerned: “Galaa katey, wo choon naa karey/Aur moonh rakht bahaye/So pyaari baatein karein/Fikar katha dikhlaaye”, or more wider, as in: “Ek nagari mein jeev batees/Baarah pashu, maanush bees/Waa sab ka hai ajab swabhaav/Katey, marey, par aavey na ghav” (the numbers should be a give-away, though Chadha errs a little in his explanation – “Shaah Maa” is a Farsi term, not an Arabic phrase).

There is much more to surprise and enlighten, and in the end, you are left wishing there could be more. But there is, you only have to find it.

Chadha does a most remarkable job in using this unexpected form to bring out vignettes of this remarkable Indian “Renaissance Man”, and in the process, demonstrates the boundless capacity of human language and thought to express the familiar in unusual ways. (IANS)