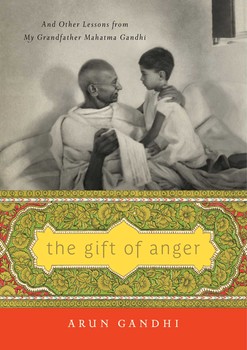 Father of the Nation Mahatma Gandhi is widely thought to have been a calm and composed personality but this highly anecdotal book by one of his grandsons suggests otherwise. Gandhi, the author says, lost his cool all the time and believed that “anger is good”.

The much revered leader’s fifth grandson Arun Gandhi’s latest book “The Gift of Anger” throws light on several important lessons that the author learned from his grandfather and the Mahatma’s principles on anger remain the guiding light for the author even decades after his death.

Citing several conversations that Arun Gandhi had with his grandfather, he claims that the Mahatma, called Bapu by those close to him, regarded anger as a positive force. “It is an energy that compels us to define what is right and wrong,” Gandhi is quoted as saying to the author in the book.

But how can anger be a positive force and, more so, how come nobody ever saw Bapu angry?

“Because I have learned to use my anger for good. Anger to people is like gas to the automobile — it fuels you to move forward and get to a better place. Without it, we would not be motivated to rise to a challenge. It is an energy that compels us to define what is just and unjust,” the grandfather told the author.

In this moving story of his years being raised at the iconic Sevagram Ashram in Maharashtra, where the Mahatma lived from 1936 till his assassination in 1948, Arun Gandhi’s charming memories of his grandfather are engaging and often surprising. His anecdotes provide a rare insight into Gandhi the man and not Gandhi the mass leader.

These are memories of the two years that Arun spent with Bapu. As Mahatma Gandhi went on making changes on the world stage, the author learnt to make changes in himself and overcome his own emotions.

Arun Gandhi was just 12 years old when his parents dropped him off at Sevagram. To Arun, the man who fought for India’s independence and was the country’s beloved and pre-eminent philosopher and leader was simply a family member. He lived there for two years under his grandfather’s wing until Gandhi’s assassination.

Even as Bapu was imparting his lessons to Arun, our author lost his cool all the time. In one instance he was so furious after a boy purposely tripped him while playing football that he grabbed a rock to throw at the miscreant with all his strength. But then he heard a small voice in his head, “Don’t do it.”

The author goes to his grandfather and tells him about the entire episode and this is when the lessons on anger begin. In the months to come, as they both spun cotton on the spinning wheel, the Mahatma Gandhi imparted his wisdom on the subject to his grandson.

The author was stunned to find out that the man revered so gloriously in India and around the world hadn’t been born even-tempered. In his childhood, Mahatma Gandhi stole money to buy cigarettes and frequently got into trouble with other kids. He often shouted at his wife (Kasturba) and once even tried to physically throw her out of the house.

“But he didn’t like the person he was becoming, so he began to mould himself into the even-tempered, well-controlled person he wanted to be,” writes Arun Gandhi. The words of Bapu, he says in the book, reignited his spirits and he understood if Bapu could overcome his anger and use it as a positive force, so could he.

Apart from anger, the book contains lessons on other equally important subjects, such as self-discovery, identity, dealing with depression, loneliness, friendship, and family. While each chapter contains a singular, timeless lesson, “The Gift of Anger” also takes its readers along with the author on a moving journey of self-discovery as he learns to overcome his own failings, to express his emotions and harness the power of anger to bring about good.

He learns to see the world through new eyes under the tutelage of his beloved grandfather and provides a rare, three-dimensional portrait of this icon for the ages.

Arun Gandhi has written several books before “The Gift of Anger”. The first, “A Patch of White”, is about life in prejudiced South Africa; then, he wrote two books on poverty and politics in India; followed by a compilation of Mahatma Gandhi’s Wit and Wisdom. He also edited a book of essays on “World Without Violence: Can Gandhi’s Vision Become Reality?” And, more recently, “The Forgotten Woman: The Untold Story of Kastur,” jointly with his late wife Sunanda. (IANS)