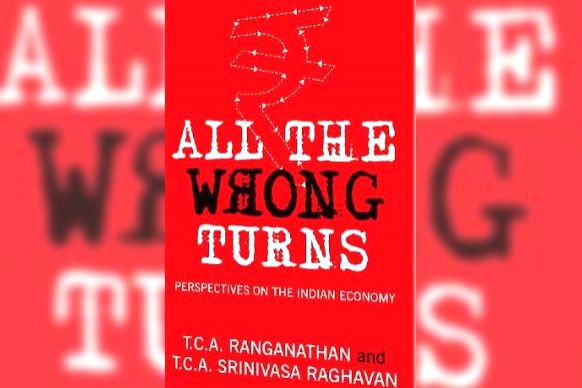 New Delhi– Not too long ago, India was the darling of the world with its rosy growth story. Then came the 2008 global meltdown and it all came crashing down. Thereafter a recovery seemed in sight with GDP growth at 8 per cent in 2018-19, but now it’s down to 5 per cent in 2020-21.

But then, as a new book says, there hasn’t been a single decade since 1950 when the Indian economy hasn’t lurched from one crisis to another. More importantly, how did China do it while India fell far, far behind?

“Though few people realise it, the strategy that China has followed since the late 1970s — and that India only partially followed till it almost gave it up in the 1970s — was the same as that was first depicted by Alfred Marshall in his ‘Principles of Economics’ while attributing competitive efficiency to the emergence of what later came to be be called (in his honour) ‘Marshallian industrial districts’ — a clustering of firms in a similar industry operating from a certain geographic area proximately located close to a city,” T.C.A. Ranganathan and T.C.A. Srinivasa Raghavan wrote in “All the Wrong Turns” (Westland/pp349/Rs799).

The co-location of several firms of the same industry allows a number of benefits, sometimes called benefits of agglomeration or externalities, the book says.

What is forgotten in India-China comparisons is that China also focused on ‘combo’ development: cities/industries/commercial zones “together as an integrated issue. The ‘foreigners’, attracted by the amenities available in the newly well-planned cities, built their vast variety of factories in these government created and managed zones”, the authors explain.

The authors then present six essays, most of them some 60 pages long, on six critical areas: agriculture, manufacturing, international trade, banking, fiscal policy and institutions. The first four have been penned by Ranganathan, a career banker with close to four decades of experience who retired as Chairman of the Export Import Bank of India, and the remaining two by Srinivasa Raghavan, an economic journalist of some four decades standing.

What then ails the Indian economy?

* Agriculture: It’s not that agriculture and farmers do not get state support in other countries; they do but mostly it is in the nature of ‘income support’ (i.e. farmer-oriented or land-oriented income transfers), not ‘production distorting support’ (crop support schemes such as fertilisers, water, power pricing, subvented loans, MSP and procurement price announcements etc) practised by the Indian authorities.

The debate on agrarian distress “requires to be made more holistic instead of being studied only under a ‘partial equilibrium’ framework with ‘ceteris paribus’ assumptions. Quick fixes and palliatives frequently announced by various ‘fast thinking’ members of the governing class will never be appropriate substitutes,” the book says.

* Manufacturing: The focus of reform has to be where ‘mis-signals’ get generated. “A one-size-fits-all methodology will not work. Alongside, the uniquely Indian definition of what constitutes good governance will need to change. In a globalised world where we are likely to enter into regional and preferential trade arrangements, we will need to fall in line with the governance style of the rest of the world,” the book points out.

* International Trade: The main challenge which India Inc. is seen to experience while engaging in international trade, looks remarkably similar to that experienced by the average citizen in day-to-day living. “Adequate well-paid jobs are not coming up because enough ‘good companies’ are not setting up operations in most parts of the country….There is thus a need for India to reflect and reorganise its thought processes and reflexes,” the book says.

* Banking: Noting that it is often forgotten that Indian PSBs had no prior experience with either infrastructure lending or large project finance till the late Nineties, the book says that nowadays, increased network size and lumpy agglomerations are looking to be a more attractive solution to the PSB woes and that “interesting times” could lie ahead.

“In sum, what emerges is that the other peer countries, without exception, followed a certain structural model. The Indian state believes otherwise and has taken the less travelled path. This has influenced the evolutionary path of the various sub-components, making the story of banking in India rather chequered if not interesting,” the book says.

* Fiscal Policy: Income tax has been justified on the grounds that it helps the rich help the poor, “never mind that it is at gunpoint. The truth, alas, is different. But far from having any egalitarian outcome, it basically forces the productive parts of society to pay for the upkeep of those who contribute absolutely nothing to it. The state has replaced religious bodies (which received zakat, tithe, daan and so on) as the intermediary”, the book says.

Thanks to its economic policies, India — instead of becoming a manufacturing economy where the mass of the people earn regular wages, salaries — has become a service providing one. This in turn has meant a huge proliferation of self-employed individuals such as doctors, lawyers, architects, IT professionals and so on, the book says, urging that the tax rate be reduced to 5 and 10 per cent.

“If the state must act an an intermediary, it can at least copy the religions which taxed at a fixed low rate. The short point is this: we must take politics and the accompanying moral imperative out of taxation,” the book says.

* The Institutions: The time has now come for some original thinking by Indian economists. It has become necessary to move away from the one-size-fits-all economic theory. The starting point must be the abandonment of the postulate in which western economics is rooted, namely greed, the book says.

“Every country needs to develop analytical frameworks which are best suited to its context….(this) is not going to develop overnight, but some Indian economists need to start thinking about these issues. To do so efficiently, they will have to learn Indian sociology, rather than assume that it is irrelevant because their discipline is value- neutral. It is not,” the book concluded.