Women should speak for themselves, says Sunny Leone

New Delhi– From being an adult star to playing the lead role in Bollywood films, actress Sunny Leone aka Karanjit Kaur, who fought several hardships throughout her career, believes women should stand up for their rights.

Sunny also said that to bring a change in the society, people first should change themselves.

“In homes, women must feel free to express what they want to say. If they don’t want to wash dishes, they can confidently ask husbands to wash the dishes. Making small choices will change the status of women in our country and I believe it should happen in homes first.

Mumbai– Bollywood actor Harshvardhan Kapoor on Tuesday said that he prefers to keep his skincare routine simple but regular.

During the launch of Cinthol Awesome Men collection here, Harshvardhan told IANS: “I am one of those men who really take their skincare routine and grooming seriously. I will say — keep your routine simple but consistent, do not take your skin for granted.”

“I keep things very basic with a regular moisturiser and sunblock cream. If cleanshaven, I use aftershave. If I keep a beard, which is my present look, I use beard oil to keep hair soft. Since I have sensitive skin, I am very conscious about products that I use,” added the actor who started his career in Bollywood with “Mirzyan” in 2016.

According to the actor, during his adolescence, he had to face many bad skin days.

“I used to experiment too much with cosmetic products and that affected my skin. My skin behaves differently during weather changes, so I choose my product wisely,” shared the brother of National Wward-winning actress Sonam Kapoor.

As the actor has become the face of Godrej Cinthol grooming collection for men along with Arpinder Singh (gold medallist, Asian Games 2018), when asked about how he feels associated with brand Cinthol, Harshvardhan replied: “Since the brand is in the business for quite some time it holds nostalgic value. At the same time the product range launched for men’s grooming is to match our daily needs to stay stylish. I find them cool.”

Jaipur– The special children of Umang, a Jaipur-based NGO, had a whale of a time as Bollywood superstar Salman Khan officially inaugurated the centre on Tuesday. 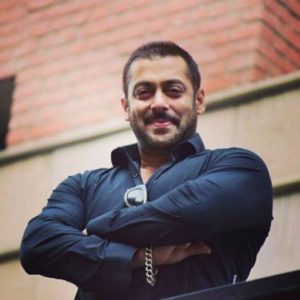 After unveiling the plaque, Salman met the children with great warmth and affection as they continually cheered for him.

Trustee of Umang and former Rajasthan Tourism Minister Bina Kak took the actor around and showed the various services and facilities being provided in the institute. He also met the citizens of Jaipur who have been supporting the centre and its work.

Salman said he has been associated with Umang since the past few years and it is indeed a matter of great happiness and pride to see the way it has grown over the years. It has around 300 children and many of them have learnt skills to become self-reliant.

The Umang shop, which houses multifarious products which are made by the children and are for sale, was also inaugurated by Salman. He said he is very fond of Rajasthan and loves coming to Jaipur whenever he gets an opportunity.

Mumbai– Actress Rasika Dugal, who plays Saadat Hasan Manto’s wife in the forthcoming film “Manto”, is hosting the late Urdu writer’s daughters in India. She says that it is nice to finally get to meet the family.

Manto has three daughters, who live in Lahore. They have been extremely involved in the entire process of this film. Nusrat and Nuzhat flew to Mumbai to watch the film at a special screening of “Manto” on Monday.

Rasika and the film’s director Nandita Das are making sure they get to see the “Bombay” that their father loved. The two daughters will also be visiting Delhi.

“It is so nice to finally get to meet the family. Nandita’s efforts have finally brought them here. It gives me great joy to show them around Bombay (now Mumbai) – the city that their parents loved,” Rasika said in a statement.

“We went to Prithvi theatre and all of us including Nawazuddin Siddiqui (who plays Manto in the film) met for dinner later. So many stories were shared about Manto and Safia (his wife).”

“Manto” is slated to release on September 21.

Mumbai– Actress Aishwarya Devan says she feels happy that her debut role in Bollywood is of a strong female character.

Aishwarya interacted with media on Tuesday for the promotion of her forthcoming film “Kaashi in Search of Ganga”. The film will also mark her debut in Bollywood.

Talking about her character Devina, who is a journalist from Lucknow, Aishwarya said, “I haven’t done as many strong roles in South films so I am very happy that my debut role in Bollywood is a of a strong female character. The director of this film (Dhiraj Kumar) who is also a debutant, helped me a lot while shooting for the film.

“I didn’t have to prepare a lot for Devina, apart from understanding how her job as a journalist framed her strong character and her Lucknowi dialect.”

Aishwarya will appear as the lead opposite actor Sharman Joshi who will be playing the title role of Kaashi.

Asked about her experience of working with the “3 Idiots” star, she said, “I never thought I would be debuting opposite him. He is an actor that I really look up to. He had successful films like ‘3 Idiots’, ‘Rang De Basanti’ and all his characters have been so memorable.”

Directed by Dhiraj Kumar and written by Manish Kishore, the film will release on October 26.

Manto’ is creating lot of buzz among the audience since its trailer release. Makers of the film hosted the special screening on Monday here.

Directed by Nandita Das, “Manto” is based on the 1940’s post-Independence period of India. It is produced by HP Studios, Filmstoc, and Viacom 18 Motion Pictures.

The film premiered at this year’s Cannes Film Festival and will release in Indian theatres on September 21.

Shruti Haasan performs in London for the first time

Mumbai– Actress-singer Shruti Haasan was happy to perform in London for the first time, and says she is planning more “music focused gigs internationally”.

“It feels incredible to be back on stage performing. I have done a few shows in the last year but now the effort is to do more music focused gigs internationally, London being the start point,” Shruti said in a statement. A

She performed on Monday at a trendy NED Hotel as part of their New Music Monday — a weekly showcase of new and emerging music acts and artists. The evening was organised by PowerStudio which is run by Benny D, a producer who has worked with the likes of Boy George, Kylie Minogue, The Killers, Lily Allen, Robbie Williams, Stormzy and Depeche Mode.

“I have been working on a significant and distinctive number of collaborations along with my original singles. The set at The Ned had a unique and interesting style which combines the contemporary elements of the West with the magic of The East and seeing the response we have already received for it is just fantastic. I have lots more in store on the music front which will unfold as the year progresses,” she added.

According to a source, Shruti has also been working on an EP with some producers in London, which is due to release in 2019.

Shruti will return to India later this week and resume her shoot for Mahesh Manjrekar’s next. (IANS)