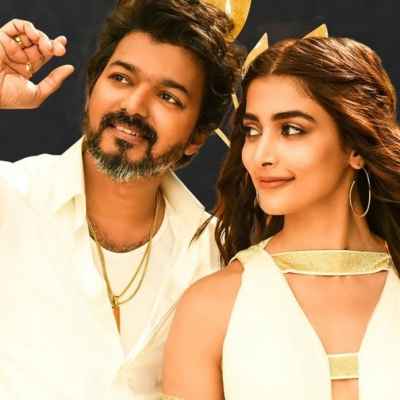 Hyderabad– ‘Beast,’ starring Vijay and Pooja Hegde was released on Wednesday. Pooja Hegde, who has become one of the most popular heroines in recent times, has appeared in a role that is essentially an extended cameo.

Apart from one song in the first half, she doesn’t have much of an impact, which has upset her slowly increasing fandom.

Starring Vijay as the lead, Pooja’s role in Nelson Dilipkumar’s directorial seems to be disappointing to the viewers.

“Nobody would have recognised her if it hadn’t been for the two songs released prior to the film’s release. This is disappointing at many levels”, one of her fans said at one of the theatres in Hyderabad, on Wednesday.

Star actresses are downgraded to only making cameo appearances in songs in superstar films, which seems to have changed in recent movies. However, in ‘Beast,’ Pooja Hegde played a silly role with no significance to the story, which changes the perspective that heroines are given equal importance in big-budget films starring popular heroes.

Pooja Hegde, who had appeared in super hit movies like ‘Maharshi’, ‘DJ-Duvvada Jagannadham’, ‘Aravinda Sametha Veera Raghava’, ‘Ala Vaikunthapuramloo’, has been in limelight for a long time now.

Mumbai– Actor Ranbir Kapoor’s brother-in-law Saif Ali Khan and his cousin Kareena Kapoor Khan made a style statement on Thursday as they twinned in baby pink for actress Alia Bhatt and Ranbir’s wedding. 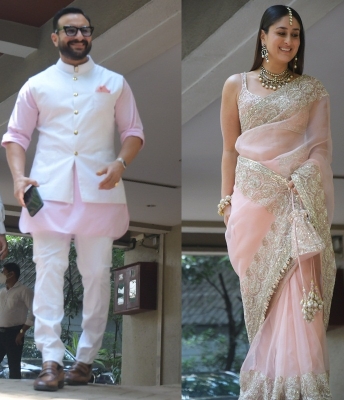 Popularly called as ‘Saifeena’ by their fans, the husband-wife duo looked every inch royal in powder pink Indian attire. Kareena stunned in a saree embellished with silver while Saif looked dapper in a pink kurta paired with an ivory Nehru jacket and pyjamas.

Ranbir is all set to take home his ‘dulhaniya’ Alia on Thursday. The two celebrated the mehendi, haldi and sangeet ceremony on Wednesday at his Pali Hill residence Vastu.

The two stars met on the sets of ‘Brahmastra’ in 2018. Their whirlwind romance was very much talked about and in 2020 it was Ranbir, who in an interview confirmed the news about their relationship.

‘Brahmastra’ is all set to release on September 9. This will be the first time the two will be seen together on screen.

Mumbai– Not long after Alia Bhatt and Ranbir Kapoor officially became Mrs and Mr Kapoor, and once the no-fuss ceremonies got over, Alia shared a bunch of dream-like pictures of the couple on her social media.

Taking to her Instagram, Alia posted a series of pictures with Ranbir, who’s seen sporting a well-developed beard. She wrote in the caption: “Today, surrounded by our family and friends, at home, in our favourite spot — the balcony we’ve spent the last five years of our relationship — we got married.”

She continued: “With so much already behind us, we can’t wait to build more memories together, memories that are full of love, laughter, comfortable silences, movie nights, silly fights, wine delights and Chinese bites. Thank you for all the love and light during this very momentous time in our lives. It has made this moment all the more special. Love, Ranbir and Alia.”

In the pictures, the star couple can be seen wearing cream-coloured wedding outfits, drenched in the golden shade of the setting Mumbai sun.

Ranbir and Alia began dating on the sets of “Brahmastra” in 2018 and made their first appearance as a couple at Sonam Kapoor’s wedding reception in the same year.

After the wedding, incidentally, Ranbir’s cousin, Kareena Kapoor Khan, shared a picture of her second child Jeh on Instagram. The mother-son duo dressed in matching shades of pink can be seen laughing their hearts out for the camera.

Hyderabad– Actress Samantha Ruth Prabhu, who will next be seen in Vignesh Shivan’s directorial ‘Kaathu Vaakula Rendu Kadhal’, wraps up dubbing for her role in the movie. 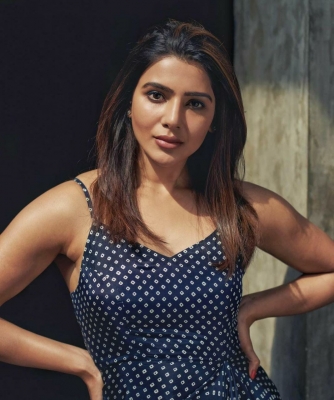 After wrapping up the dubbing part for ‘Kaathu Vaakula Rendu Kadhal,’ the ‘Majili’ actress took to Instagram to thank her team.

The actress penned a sweet note alongside sharing a picture from the dubbing studio, which reads, “And.. Its a wrap for KRK’. Dubbing done. So so excited for you guys to see this one.”

“And Thank you to the amazing people around me who have made working in this film an absolute breeze..love ya”, Samantha wrote, as she tagged her teammates along with director Vignesh.

Vignesh Shivan, who shared Samantha’s post, responded, saying, “What a pleasure it has been to collaborate with you!! Thank you for your kind words “..