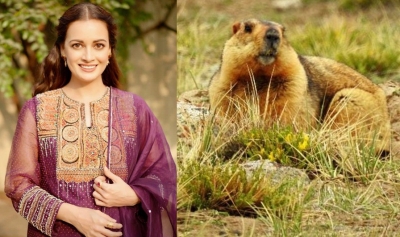 Mumbai– Actress-producer Dia Mirza, who will be soon seen in the upcoming film “Dhak Dhak”, recently shared an adorable memory from her filming schedule in Ladakh for the film, where she spotted the rare Himalayan Marmot.

Himalayan Marmot, which is also known as a Tibetan snow pig, is a marmot species that inhabits alpine grasslands throughout the Himalayas and on the Tibetan Plateau. It is IUCN Red Listed as Least Concern because of its wide range and possibly large population.

Taking to her Twitter handle, Dia shared a series of 4 photographs and wrote in the tweet: “One of the most beautiful sightings while filming for #DhakDhak in Ladakh was this #HimalayanMarmot. We spent a good 10 mins watching one another. #ForNature #ForeverWild #WildForLife (sic)”.

In the past, the actress has shared that the shooting schedule for “Dhak Dhak” had to be done over an extended period and travelling constantly from one location to another across rough terrain.

In the film, she will be seen playing a hijab-clad biker. The film has been making waves since its shoot commenced in 2022 not just for its stunning cast but also for its unusual premise of four women on bikes undertaking the journey of a lifetime from Delhi to the world’s highest motorable pass – KhardungLa pass.

Mumbai– Actress Urvashi Dholakia, of “Kasautii Zindagii Kay” fame, will be seen playing an intriguing character of a powerful businesswoman who sexually exploits her employee in the ‘Me Too’ episode of the web series “Avaidh”. 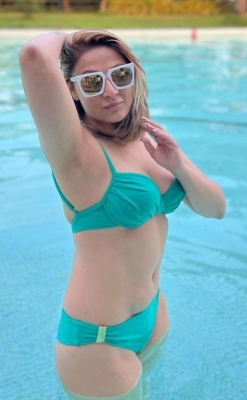 The series comprises eight different short stories based on a common theme of illicit relationships.

Urvashi is seen as Ketki, who sexually exploits her employee, Vicky.

Under the influence of his colleague, Vicky takes an extreme step.

Urvashi says: “I am really excited to be a part of this interesting project. I was thrilled when I heard the script, and one does not get the chance every day to play with a complex and multi-layered character. Ketki is a powerful, influential, bold woman who knows how to get things done and I think that’s what makes her so fascinating.

“The actress, who rose to fame with her negative role of Komolika in the popular TV show “Kasautii Zindagii Kay” and was also seen in “Kabhii Sautan Kabhii Sahelii”, “Kahiin To Hoga”, among others, further spoke about the intriguing plot of the show.

“The climax of the story is something that needs to be seen to believe and it will surely leave an impact on the viewers. The best thing is the entire web series would be in a quick snackable format and I just can’t wait for the audience to watch this series,” she added.

‘We used to giggle and shy away from sex education class,’ says Rakul

Mumbai– Actress Rakul Preet Singh, who is gearing up for her upcoming streaming film ‘Chhatriwali’, spoke about her experience with sex education when she was in school.

The film talks about the inhibitions around male contraceptives and safe sex. However, the actress said that it is a family drama and can be watched with parents as well. 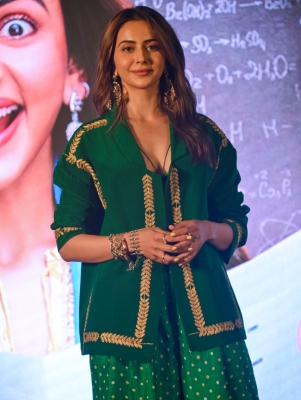 She said: “It’s a family film, a film which I can watch with my family or parents or my father sitting right next to me because not one dialogue in the film is creepy or has double meaning. Everything is a matter of fact, and it is the need of the hour.”

The actress, who is known for her work in Bollywood and South cinema and was seen in films such as ‘Doctor G’ and ‘Thank God’, spoke about the taboo around discussing sex education.

“When I was in 9th/10th grade and whenever sex education class used to happen, as teenagers, we used to giggle and shy away from this topic and find excuses to bunk these classes because somewhere knowingly or unknowingly, there is a taboo around this conversation,” she confessed.

“I feel it’s absolutely normal to discuss this because if we can discuss heart health then why can’t we discuss uterus health or STDs. It’s part of our health, so we shouldn’t shy away from speaking about this topic openly,” the actress further mentioned.

She shared her hope from the movie and said that people who watch the film will have a change in approach.

“The motive of the film is entertaining people, and I feel that if through entertainment you can change people’s ideology and set them on the right path, that’s a bonus. And if ten people change their way of thinking, it’s an achievement for us.”

Produced by Ronnie Screwvala and directed by Tejas Prabha Vijay Deoskar, ‘Chhatriwali’ features Rakul Preet Singh and Sumeet Vyas. It will be released on January 20 on ZEE5.

Mumbai– After ‘Ugly’, ‘Almost Pyaar with DJ Mohabbat’ is filmmaker Anurag Kashyap’s next film that has been solely written by him. The director got candid about his project and shared that how after discussing with his daughter, the idea for writing a story based on the concept of modern relationships came to his mind. 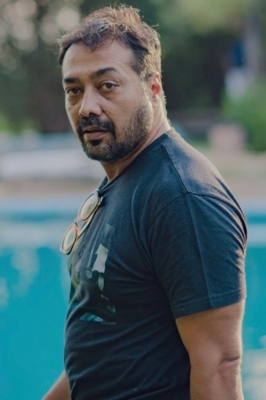 He said: “I’ve had the story idea brewing in my mind for a long time. I have always liked to explore relationships in the context of big cities, big towns, small towns, and middle class relationships. I was in conversation with my daughter and by the end of our discussion it hit me that it was important to explore struggles, challenges that the GenZ generation undergoes.”

The director, who is known for his films like ‘Black Friday’, ‘Ugly’, ‘Bombay Velvet’, ‘Gangs of Wasseypur’, ‘Dobaaraa’, among others, shared further about working on the story of the movie after a detailed conversation with his daughter.

He added: “With that in mind, I set out to write the stories, fun, musical love stories with the help of Shellee and Amit Trivedi. We also improvised as we went along with the gen Z actors Karan and Alaya. It’s after a long time I have gone back to pen and paper and wrote a script. Actually after ‘Ugly’, something that originated entirely from me.”

This film is about young people finding themselves, finding love and also it portrays a total lack of unwillingness among the older generation to understand.

‘Almost Pyaar with DJ Mohabbat’ features ‘Freddy’ actress Alaya F and actor Karan Mehta, who marks his debut. Presented by Zee Studios under the Good Bad Films production, it is slated to release on February 3.

Mumbai– Actor Sikandar Kher, who swayed the audience with his work in the streaming film ‘Monica O My Darling’, is back on the sets of his popular OTT show ‘Aarya’ which sees former Miss Universe and actress Sushmita Sen essaying the titular role. 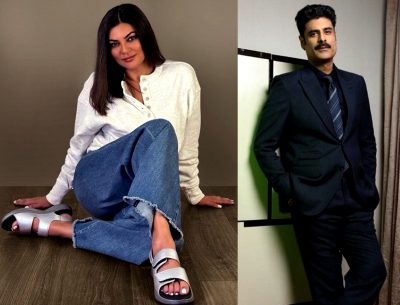 As he recently began shooting for season 3, the actor shared a video giving a glimpse that his character of Daulat is soon going to be back on the big screen. He also shared that sweet welcome note from the director of the show, Ram Madhvani and his team.

The note quoted Al Pacino’s Tony Montana from ‘Scarface’, “The eyes, chico. They never lie.” The quote refers to the subtle but very impactful acting prowess that Sikandar has brought to the table with his eyes in the previous two seasons essaying the complex role of Daulat in the show.

The actor says, “Its great to being back the character I have worked and lived with for two seasons now. Looking forward to be working with Ram, Sushmita and the entire team again. From what I have read im certain there’s a lot for the audiences to look forward to”.

He further mentioned, “I can’t reveal much at the moment as we have just begun shooting, but yes the character progresses a lot in the third season of the show! Excited for Daulat to be back”.