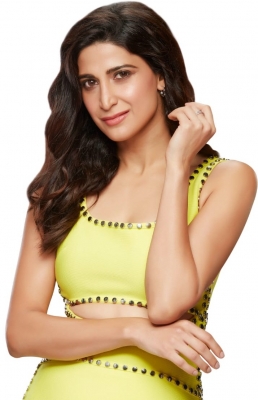 Aahana said: “The Inventor Challenge has an interesting concept. What I like the most is that the show will not only provide a space for innovations to thrive, but also help inventors to develop their ideas and take them forward.”

“You don’t usually come across a show like this that showcases the fascinating journey of the next big inventor and invention. I’m confident that The Inventor Challenge will engage viewers and will receive appreciation from the critics too. I can’t wait for it to go live.”

Participants will get the opportunity to discuss their propositions with a panel, who will then select a few inventors to proceed forward.

Next in line are the mentors, who will help the top two inventors nurture their ideas in live lab locations and turn them into ground-breaking concepts. Finally, these ideas will be brought to life and presented to various consumer focus groups. Inventors across the country and all age groups will be seen showcasing their inventions on the show. The youngest inventor on the show is eight.

Chennai– Actor Dulquer Salmaan has penned a touching birthday wish for his ‘Sita Ramam’ co-star Mrunal Thakur, who celebrates her birthday on Monday. 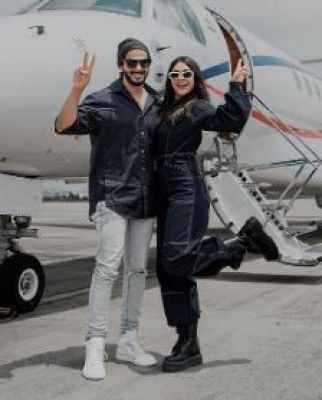 Taking to Instagram, the actor, who posted a video clip of him dancing with Mrunal, wrote, ” Priyamaina Sita Mahalakshmi Gariki (To dear Sita Mahalakshmi), When I first heard the script of ‘Sita Ramam’, neither did the film have a cast locked nor did it have a title.

“I knew Sita Mahalakshmi was one of the most special characters I’ve read and she had a face you imagined in a classic epic. You came on board the film and you gave her a face and life.

“In our first meeting, when you said, “Macha are you ready”, I knew we would have the best time making the film and be great friends. I watched through the toughest shoot days and challenging weather how you held onto your portrayal of Sita. What you’ve done as Sita is one for the ages and I think forever more to audiences you’ll be synonymous with the name Sita Mahalakshmi.

“Thank you for being Sita to Ram. Cannot wait for August 5th where the world will watch ‘Sita Ramam’ and fall in love with Sita Mahalakshmi.

“Wishing you the happiest birthday Sita garu ! The film will be your best birthday present. Itlu Mi Ram.”

Chennai– Actress Samyuktha Hegde, who sustained a ligament tear while shooting for a stunt sequence for the Kannada film ‘Kreem’, will undergo a surgery to recover from the injury. 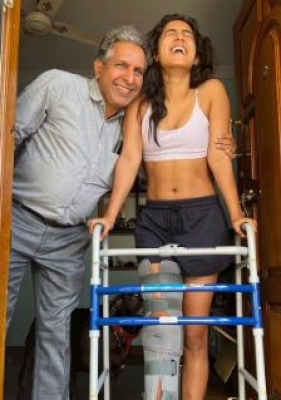 Taking to Instagram, the actress posted a video clip of the stunt sequence in which she sustained the injury and wrote, “I tore my ACL and that’s how it happened! We were shooting for a fight sequence. I rehearsed the scene perfectly about six times before the take and then, on take, I slipped a dot and my knee slipped a little more than a dot.

“I screamed with a chilling pain and my mind went blank. A few seconds later, I couldn’t even understand where the pain was felt from. I’m someone who doesn’t cry for small injuries. I just dust myself off and get back to whatever I was doing but this time, I couldn’t.

“I was on set so my team helped me to the hospital and the doctor looked at me and said it shouldn’t be anything major cause I’d be in a lot of pain and tears if it was.

“We did an x-ray and all my bones looked fine, then we did an MRI (my first MRI) and there we could see that my ligament was completely torn. I consulted five different surgeons, two physiotherapists and everyone has suggested I get a surgery done as the damage is not repairable by itself.

“When the last surgeon told me that this is the way, I cried not being able to accept the fact that I won’t be able to do anything except rehab and recovery for at least three-four months (best case scenario) post op.

“I’m going to give this recovery journey my all, strengthen myself and bounce back as soon as possible. My movie team, especially my director Abhishek Basanth and producer have been super supportive with everything and they are nourishing me with all the strength and positivity I need to come out of this stronger.

“Abhishek Basanth says, ‘I’m a warrior and I’m gonna come out of this into something more deadly than I am today’. My cinematographer Sunoj Velayudhan constantly reminds me I’m his hero and there’s no one who could have done the things I have in this film and this is the time I need to focus on getting better and that’s it.

Mumbai– It girl Rashmika Mandanna and Bollywood star Vicky Kaushal have hinted towards sharing screen space yet again as the duo has shared adorable pictures from sets. 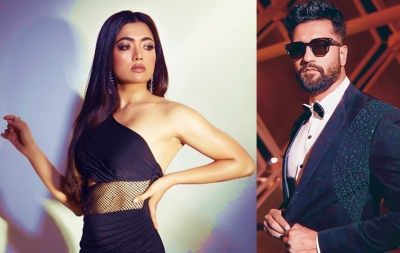 Taking to her Instagram stories, Rashmika posted a picture of a ball on which she has drawn a face with eyes, nose and mouth.

Sharing the picture, the actress tagged Vicky and wrote: “Apparently, this is my look for you at shoot day.”

Meanwhile Vicky reshared the post on his Insta story and wrote: “Was asked to ‘stand’ all green faced.”

However, later Vicky posted another story on his Insta which again featured a ball with eyes, nose and mouth drawn on it.

He wrote: “It was great working with you too.” Replying to his post, the actress wrote: “Someone’s done a gooood job making me look like one virus. Thanks, I am touched with this. Lovu.”

The two did not share what they are working on or what the project is.

On the work front, Rashmika has ‘Animal’, co-starring Ranbir Kapoor. She will be making her much-awaited Bollywood debut with ‘Goodbye’ starring Amitabh Bachchan. She also has the sequel of ‘Pushpa’, ‘Mission Majnu’ and ‘Varisu’ with Vijay Thalapatty.

Vicky will be seen in ‘Govinda Naam Mera’ and ‘Sam Bahadur’. (IANS)