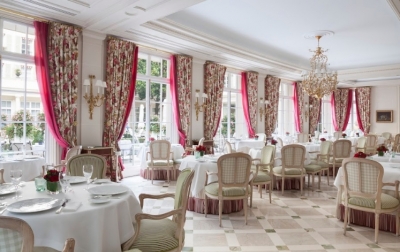 New Delhi– Food is an essential part of any trip. A restaurant that combines unique tastes and flavours with stunning decor creates an unforgettable experience and becomes a key component of the destination. Here are some of the most luxurious restaurants in the world to bookmark for your travel this year, as a treat for both your eyes and taste buds.

Celebrity chef Eric Frechon, who has four Michelin stars, has created a temple of French gastronomy at Epicure at the iconic Le Bristol Paris.

Chef Eric Frechon has called Le Bristol home for the past two decades, resulting in one of the most prestigious signatures in contemporary fine dining. Epicure was awarded three Michelin stars in 2009, which it has kept every year since. Eric Frechon’s cooking is awe-inspiring for its creativity, with his subtle sense of flavour harmony and delicate use of sauces. His macaroni stuffed with black truffle, artichoke, and duck foie gras, gratinee with aged Parmesan, is a must-try for visitors to Paris.

The Epicure restaurant is open every day of the year, with tables set in an exquisite garden setting during the summer.

Plenitude’s cuisine is inspired by the tradition of preservations such as broths, vinaigrettes, creams, veloutes, and juices. These rural traditions of potting, refining, and maturation produce indelible essences and perennial aromas. Arnaud Donckele has descended into this ancestral art of preservation with zeal in search of new fragrances and flavours. He combines this heritage, completely reinvented during his exploratory walks, with the day’s freshest ingredients.

For each of his “magic potions”, Arnaud Donckele has given a number, such as his Veloursn 1, whose secret lies in a skilful composition of bonito belly filets, prawn consomme, Lambrusco-and Chardonnay vinegar, chestnut honey and citron essence, rosemary infusion, roasted fish-head oil, and Java pepper. And then there are his other sublime sauces: Juice n2, Cream n7, Vinaigrette n6 or Bouillon n9. So many extracts of happiness infused into the moment and the plate of the day. The discoveries continue with Maxime Frederic’s desserts, which seal another alliance: that of two artists’ flavours.

Armani/Ristorante draws on the rich gastronomic traditions of Italy to provide you with classic and authentic culinary delights. The dishes take advantage of fresh produce served amid an elegant ambience with impeccable and lifestyle service. Armani/Ristorante features a unique Enoteca with an exclusive and wide selection of wine and a private dining.

Chef Francesco Mascheroni cuisine brings together classic Italian culinary traditions with an international twist. Francesco carefully selects the finest produce from Italy and beyond, creating dishes that aim to bring out the true flavours of each ingredient. Francesco’s creations feature a carefully balanced selection of textures and flavour combinations that are sure to surprise and delight the palate.

L’Atelier Robuchon at The Woodward Geneva

After seven years as Executive Chef of L’Atelier in Taipei, Chef Olivier Jean is at the helm of the kitchens at The Woodward, an all-suite hotel located on the shores of Lake Geneva. L’Atelier Robuchon features the legendary chef’s open kitchen concept, creating a theatrical dining experience for 36 guests seated around the counter, as well as two dining rooms that can be privatised.

After Paris, Tokyo, New York, Shanghai, Las Vegas and Miami, Geneva welcomes the first and only Swiss address for the French chef.

The fine-dining restaurant, emblematic to Marrakech, offers nothing but taste discoveries and sensory delight. Sh’hiwates, seafood pastillas, seven-vegetable couscous and Amlou ice-cream show you a new interpretation of Moroccan cuisine based on the deep secrets of tradition. The very best of Moroccan fine dining is served in an equally matched setting: simply royal. High ceilings, original artworks, designer linens, cutlery, glassware and peaceful melodies from luth and oud musicians: the omnipresent elegance is there to give rise to the greatest pleasure.

Overlooking the Gulf of Thailand, the Taste of Siamrestaurant at Chiva-Som, Asia’s renowned and pioneering wellness destination, is the perfect blend of contemporary and traditional Thai architecture. Ideal for those who want to relax and recover from the rigours of a hectic lifestyle, ‘Taste of Siam’ Restaurant showcases Thailand’s exceptional wellness cuisine and is the perfect place to enjoy a moment of serenity.

Serving delicious wellness cuisine, the exclusive beachside restaurant offers a contemporary guilt-free menu of Thai and international cuisine. The culinary team’s skills and techniques, which has been developed over many years, are combined with the freshest of organic ingredients, many grown in the resort’s own organic garden, to deliver masterful cooking that delivers both flavour and goodness.

Chiva-Som believes nutrition should be viewed as a foundation of health, as well as a source of pleasure seducing the senses and satisfying your hunger. Balanced meals are created in its open kitchen by award-winning Chefs. Chiva-Somembraces your dietary requirements such as vegan, vegetarian and halal — just let the tream know. (IANS)