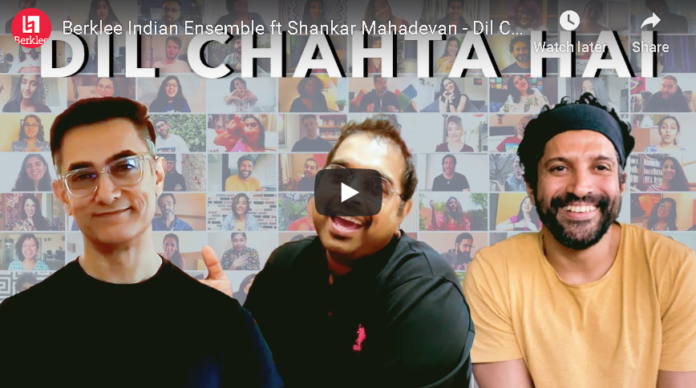 The music video offers personal messages of hope, resilience, and optimism as well as a new arrangement of the popular song “Dil Chahta Hai,” (what my heart wants) by 112 artists, musicians, and Bollywood actors, including Bollywood icon Aamir Khan (one of the lead actors of the film “Dil Chahta Hai”), and iconic vocalist Shankar Mahadevan, who composed the original song with his trio Shankar-Ehsaan-Loy, and features on the Berklee track.

“Amongst all the films that I have done, the song “Dil Chahta Hai” is certainly one of my favorites because the song beautifully composed by Shankar–Ehsaan–Loy and the lyrics by Javed Akhtar are just exquisite,” says Aamir Khan. “I’m really happy to know that Berklee College of Music has done a recording of this song and that all the funds collected from this recording are going towards supporting musicians and singers during these very tough times that we’re living through.”

“It’s been an absolute pleasure to be part of this effort by the Berklee Indian Ensemble of Berklee College of Music to support musicians during the times of Covid-19,” states Farhan Akhtar. “We need to look out for all those whose livelihoods are affected right now and for all the joy music brings us, this is the least we can do in return. The fact that they’ve chosen “Dil Chahta Hai” makes it very special.” It is notable that the Berklee Indian Ensemble is a viral sensation in its own right, with over 170 million views of their viral videos till date, making over 51% of Berklee’s entire YouTube view count.

Eight-five Berklee musicians from 21 countries are featured in the collaborative effort, including current students and alumni from Berklee India Exchange. The goal of the video is to galvanize global philanthropic support for Indian arts and artists.

Since the Covid-19 pandemic began, the Berklee India Exchange team has connected with several musicians in India and in the United States in coming up with various ways to support working artists, daily folk musicians, and instrument builders, who are on the lower end of the economic ladder, and in need of immediate financial assistance. T-Series, the record label that owns the rights to “Dil Chahta Hai” was enthusiastic about partnering with Berklee India Exchange. With a subscriber count of 137 million as of April 2020, T-Series runs India’s most-subscribed YouTube channel. The company agreed to donate all of their proceeds from YouTube, iTunes, Spotify, and other online streaming to Salim-Sulaiman’s Zariya Foundation and T.M. Krishna’s Sumanasa Foundation. Both organizations were identified by BIX for their support of grass-roots relief work for artists.

With members from over 50 countries, the Berklee Indian Ensemble (BIE) provides an open and inclusive space for musicians from all over the world to explore, study, interpret, and create music influenced by the rich and varied mosaic that is Indian music today.

Founded in 2011 by Indian Berklee alumna and faculty member, Annette Philip, the group was the first of its kind at the college. Starting with just 18 members that year, the Ensemble is now one of the largest and most diverse performing groups at the college. With a strong focus on creating original works, BIE is known best for their globally nuanced Indian sound that honors traditions while boldly experimenting with cross pollination of genres, world cultures, and multidisciplinary forms of expression.

Today, BIE is an international viral sensation, with its music videos garnering over 180 million views, accounting for more than 51% of Berklee’s total views. The Ensemble is in such high demand globally that it now has a professional touring faction, a three-album project in the pipeline, and dreams of a stadium concert to celebrate its 10th anniversary in 2021.

Launched in 2013, the Berklee India Exchange is a campus initiative establishing a platform for cultural conversation about Indian music through artist residencies, musical collaborations, and performances. It is an axis point for Indian artists and students to share their music and experience the music of Berklee musicians hailing from more than 105 countries, and vice versa. Through the exploration of indigenous Indian instruments and the infusion of Indian folk and classical traditions into Berklee’s classrooms, a new, vibrant, and dynamic sound is emerging as we nurture the next generation of composers, songwriters, and performers.

Berklee is the preeminent institute of contemporary music and the performing arts, offering undergraduate and graduate degree programs at its campuses in Boston, Massachusetts and Valencia, Spain, and through its award-winning distance learning program, Berklee Online. Dedicated to nurturing the creative and career potential of the world’s most inspired artists, Berklee’s commitment to arts education is reflected in the work of its students, faculty, and alumni—hundreds of whom have been recognized with Grammy, Tony, Oscar, and Emmy Awards.

At Berklee College of Music and Boston Conservatory at Berklee, students explore interdisciplinary approaches to music, dance, theater, film, business, healthcare, education, technology, and more. Our pioneering youth programs reach underserved classrooms throughout the U.S. and beyond. With students and alumni from more than 100 nations and educational partners across the world, we are forging new connections among art forms, musical traditions, and technologies to build a dynamic, diverse, and collaborative global arts community.