The ensemble included Guru Smt. Sapna Krishnan on the Nattuvangam, Sri Sudev Warrier on Vocals, Sri. Sudhaman Subramanian on Mridangam, Sri.Pathanjali on Flute. The evening recital began with a beautiful invocation song on Lord Ganesha. Then the girls appeared in colorful costumes with a Ganesha idol, brought the deity to the stage with the first dance item, “Mallari”. The dance movements gave the impression of the Lord being taken in a palanquin in procession which was unique.

Each dancer then presented their solo pieces, “Mahadeva kauthuvam” by Kavya, “Narayana kauthuvam” by Shivali, and “Shanmukha kauthuvam” by Uthra. Kavya brought out the vibrant tandava elements of Lord Shiva and Shivali portrayed with precision all the ten incarnation of Lord Vishnu. Uthra’s solo performance, a composition of Sri Madurai R Mualidharan, was fast paced and beautifully executed. The three girls showed their individual strengths through these solos in the first half of the program. All the three kauthuvams were creative and uniquely choreographed, and the dancers moved delightfully. 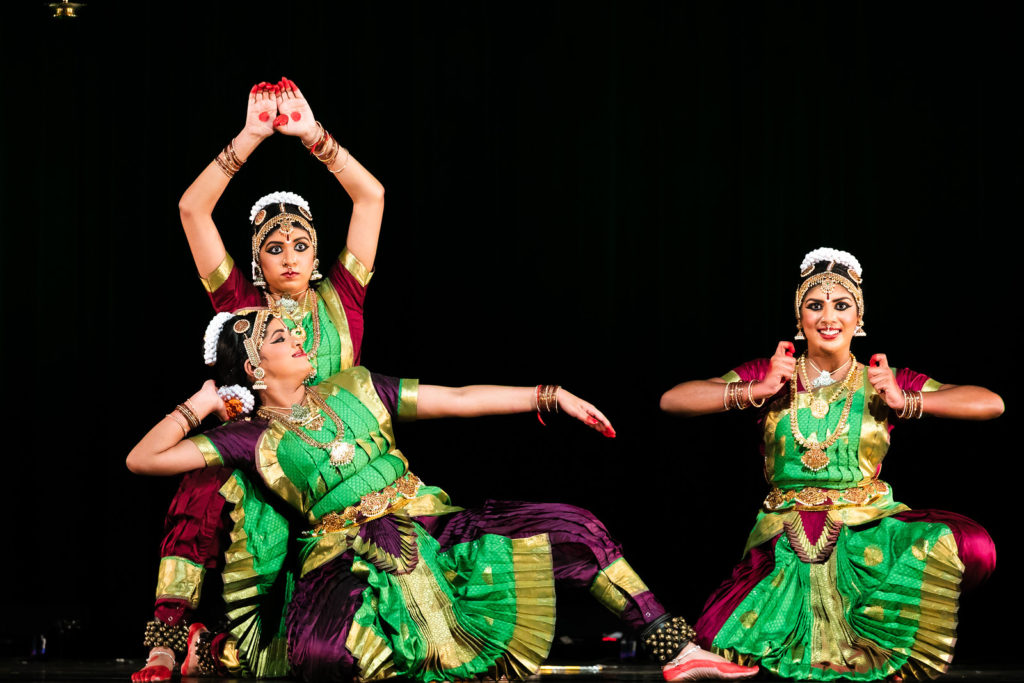 The most elaborate piece of the evening, the Varnam, stood out as most enjoyable experience with its beauty in choreography, captivating abhinaya and scintillating footwork. The Varnam in ragam Sivaranjani depicted stories of Adi Shankaracharya bringing Mookambiaka Devi to Kollur in Karnataka and the story of Abhirami Bhattar. The girls complimented each other with their individual character roles, showcasing their nritta skills. The sisters looked like three goddesses and danced with vigor and fluidity throughout the piece that lasted for thirty minutes. The audience was amazed and appreciated their performance. 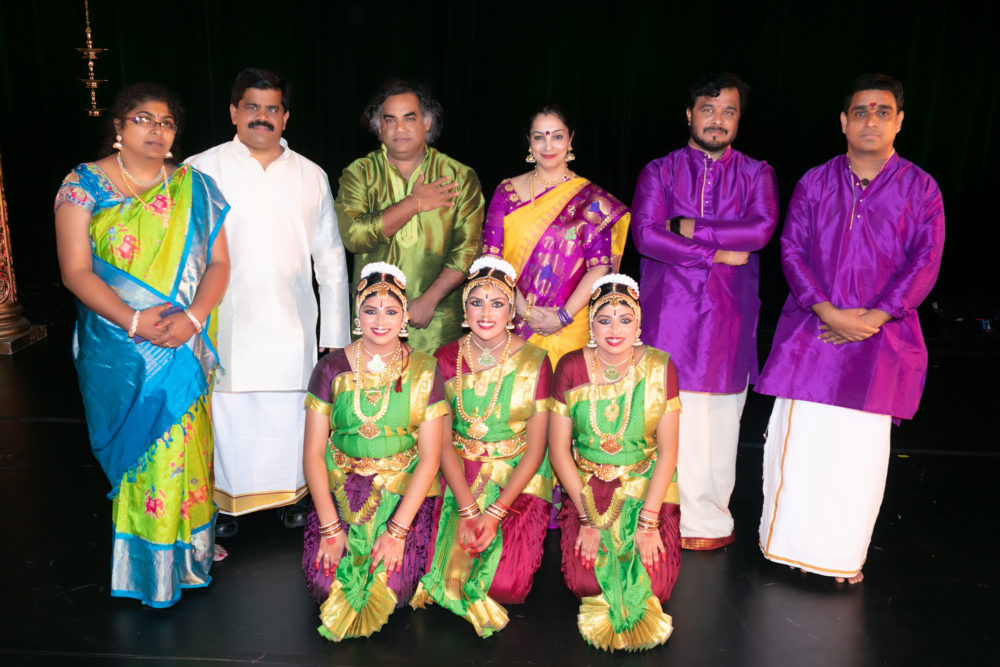 A musical interlude by the musicians that followed, captivated and entertained the audience. Sri.Sudev Warrier rendered Annamacharya’s famous composition, Brahmamokate. This song, no matter how many times you listen, always gives me goosebumps. Sri Sudhaman engaged the audience with his Mridangam Thani Avartanam. 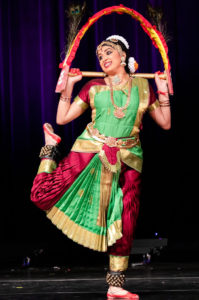 “Parkdal Alaimele” is a very famous composition of Udumalaippettai Narayana Kavi. The portrayal of the ten incarnations of Lord Vishnu, where the girls easily moved from one story to next, became another highlight of the evening. Bhakta Prahlada and Hiranyakashibu story had a profound impact on the audience, and the stunning finishing poses of the three sisters as Vishnu, Lakshmi and Adiseshan, were very impressive. Three solo pieces followed this dance. Uthra danced a brilliant piece, “Omkarakarini”, a compostion of  Dr, Balamurali Krishna, which is also a personal favorite of mine. The Mahisarsura Mardini Sloka, Aigiri Nandini and Uthra’s power packed performance invoked the Goddess. 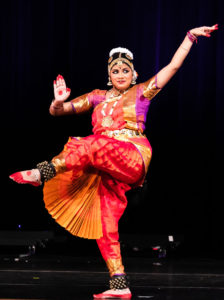 The next piece was presented by Kavya. Oothukaadu Venkatasubbaiyar’s Kavadi Chindu, “Nindra Andha Mayil” described the impact of Lord Krishna’s music on the birds, animals and gopikas of Vrindavan. The flute effects by Sri Pathanjali alongside Kavya’s beautiful light movements and expressions brought in the joy of Vrindavan,. This was followed by a Keerthanam on handsome Lord Muruga, who is repository of Knowledge and widely known as the Tamil God. Shivali danced so beautifully with Kavadi for “Kaliyuga Varadan”. The finale was a Thillana in ragam Kadanakuthuhalam that was tirelessly presented by all 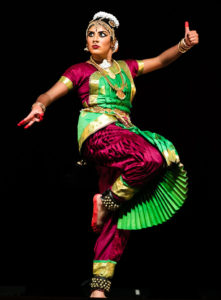 three dancers in a vibrant manner.

Mangalam was very unique in this Arangetram where the dancers thanked Lord Ganesha, Lord Muruga, Lord Nataraja, Lord Lakshmi Narasimha, Lord Rama, Lord Anjaneya, Goddess Lakshmi and Goddess Aadhiparasakthi, and also thanked their Guru, the musicians and the audience. The three sisters received a standing ovation for their fantastic performance and synchronization throughout the recital. Their hard work was very much evident in the recital. This was a truly stunning Arangetram that will be well remembered.

Congratulations to the Mani family on achieving a great milestone!!!