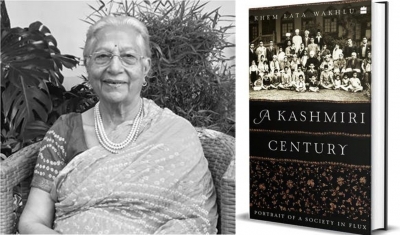 New Delhi– Perhaps the most enigmatic region in the world, Kashmir has a special place in the Indian subcontinents history.

Over the several centuries of being ruled by kings from diverse faiths and cultures — Hindus, Buddhists, Muslims, Afghans, Sikhs and Dogras — the region has undergone various cycles of social, cultural and religious changes.

Since Independence, the Kashmir Valley has received more media and government attention than any other state. The reasons have been mostly political than for its natural beauty, its contribution to Indian literature or its exuberant flora and fauna.

Writer, politician and social worker Khem Lata Wakhlu’s ‘A Kashmiri Century – Portrait of a Society in Flux’ (HarperCollins) is a one-of-a-kind book that delves deep into the human side of living in the Valley, an aspect often missing in the cold political treatises on Kashmir.

It offers a rare glimpse into the lives of Kashmiris-Hindus and Muslims alike — and how their existence revolved around the simple pleasures of life, even as they dealt with the many changes of the past one hundred years.

As a native Kashmiri, Wakhlu has seen the socio-political landscape change like few others. The stories in the book provide a glimpse of the Kashmir that her generation and her grandparents and parents grew up in. The all-encompassing view of Kashmiri ethos and culture brings a fresh outlook that is much needed in our times.

“Millennials and those unfamiliar with Kashmir will get a unique perspective on the lives of the people, and how they have retained their humour, their spiritual ethos and their resilience, even in the face of centuries of hardship,” Wakhulu says of her powerful, personal compilation of stories that reflect the human side of the Kashmir conflict.

Sachin Sharma, Senior Commissioning Editor, HarperCollins India, says: “If you look at books on Kashmir, “A Kashmiri Century” would stand out on its own. While most books on the subject are political in nature, this one provides a poignant, human side of what it is to live in Kashmir. For more than five decades, Khem Lata Wakhlu has been serving the valley as a social worker and politician. She provides a rare perspective on Kashmiri ethos and culture, something often missing in mainstream media. Here is a book that is not to be missed.”

The book has been widely lauded.

“Here is an intimate insider’s look at an interesting and transformative century of Kashmir. Wakhlu belongs to a distinguished Kashmiri Pandit family and her stories explore their inner world as the social and political life changed from relative harmony to the violence of the last few decades. An illuminating read,” says performer and activist Mallika Sarabhai.

“Story and history revel together to reveal the joyful intimacy of Kashmiri life. ‘Sambandh’, the bond that ties us, reigns supreme, whether licit or illicit, loving or traumatic, invoking courage or cowardice, horror or wonder, bringing tears of sorrow or joy. You will be touched, you will be moved. These are the magical stories of a beautiful people whose sweetness made the land wondrous until one day the music died,” says Rakesh Kumar Kaul, author of ‘The Last Queen of Kashmir’ and ‘Dawn’.

“Through a series of well-narrated stories covering a century of Kashmiri history, Khem Lata Wakhlu has covered an era of remarkable, and unprecedented, changes in the lives of the people of Jammu and Kashmir. In her inimitable style, she demonstrates that, at our deepest level, all of us — irrespective of which faith we may belong to — seek honesty, fairness and compassion from the people we interact with. Through her stories, Khem Lata has brought to life our innate desire to live by our highest human values,” says Anu Aga, former chairperson, Thermax Ltd and Teach for India.

“A Kashmiri Century” is a very interesting chronology of almost a century of socio-economic changes with political overtones in Kashmir. A beautifully written narrative, interwoven with interesting events and personalities and with a dash of humour; yet, it bears malice towards none. An excellent reading,” says Pran Kishore Kaul, Padma Shri and Sahitya Akademi awardee.

“Written with sensitivity and compassion, Wakhlu’s book gives us a panoramic view of the ethos and culture of the gentle people of Kashmir, spanning a hundred years. The gripping stories serve as beautiful reminders of the core humanistic values that we all cherish — values that are needed now, more than ever before. Khem Lata is an extraordinary woman, who has shown her grit and merit, whether in captivity or in freedom. A true heroine, and a torchbearer for Indian womanhood,” says Lila Poonawalla, Padma Shri awardee; former CMD, Alfa Laval; founder chairperson, Lila Poonawalla Foundation.

“Khem Lata Wakhlu’s imaginative rendition of an era elevates the staid telling of a family memoir into a racy, suspenseful novel. Written with perception and sensitivity, she brings to life the people and incidents of a tumultuous era that her family lived through in Kashmir. It is like an epic unfolding, spanning a century of the remarkable history of the people of Kashmir,” says filmmaker and television personality Siddharth Kak.

She was the chairperson of the state’s social welfare board, with the status of a minister of cabinet rank, from 2010 to 2014. She continues to serve as senior adviser to the Jammu and Kashmir Pradesh Congress Committee.  (IANS)