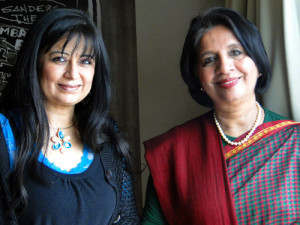 Dreams are the seedlings of reality, a wise man once said — and it was a true honor to meet Nirupama Rao, a woman of substance who at the age of 12 dreamt of being a diplomat. With sheer hard work and perseverance, she made her dream come true. She reached the highest office in the Indian Foreign Service, serving as India’s Foreign Secretary and now the Ambassador of India to the United States.

Ambassador Rao is truly an extraordinary woman. She has been called “Diva of Diplomacy” and has been a trail blazer. There have been many “firsts” in her life: first woman to achieve first place in both Indian Civil Service and Foreign Service entrance exams; first woman spokesperson for the Ministry of External Affairs; first women high commissioner to Sri Lanka; and also India’s first woman ambassador to China in 2006.

Ambassador Rao describes Boston as very close to her heart and has fond memories of the two years that she spent here as a fellow at the Weatherhead Center for International Affairs at Harvard University from 1992 to 1993,during which time she specialized in Asian Pacific security.

It was a privilege to interview her on a beautiful sunny spring morning in Cambridge, Mass., as she greeted me warmly, impeccably dressed in a green saree. She is soft spoken with a quiet strength, and exceptionally courteous with a great sense of humor. Her personality is multifaceted.

She played guitar, writes poetry, is a voracious reader and loves music and, interestingly, is the first person in the Indian Foreign Service to use twitter to communicate. A woman who describes perseverance as her best quality and expecting perfection as her weakness, Ambassador Rao’s message is simple: believe in yourself and in the power of your dreams. John Lennon said it so beautifully and seems to be perfectly suited for this amazing lady: “You may say I’m a dreamer, but I’m not the only one, I hope someday you’ll join us, and the world will live as one.”
You are an “army kid.” How do you think your family background in the army has helped you?

As army kid we moved around a lot in India as my father was posted in various parts of the country. It has helped me to adjust to different places and cities. Army life is also very cosmopolitan and helps you adjust easily to anywhere or any country. Moving in different cities and cultures is a good preparation for foreign service.
You have a master’s degree in English literature. What made you join the Indian Foreign Service?

From the time that I was quite little, in fact when I was only 12, I got interested in foreign service. I also had an uncle who was in foreign service and often talked about different places and countries, which was very interesting to me.
You have worked in many countries. Where have you enjoyed working the most and why?

I have enjoyed all the countries without any exception. I love the novelty, and I am drawn to learning about new places, cultures, customs, politics, history and way of life.
What has been your most challenging job in your career so far and why?

My most challenging job has been being the foreign secretary of India. It is a privilege to be foreign secretary. One is exposed to a wide gamut of issues, situations and one has to exercise the best judgment, carry the system and be the voice of credibility and judgment. Professionally, it has been the most fulfilling career.
What has been the best advice that you received from your parents and what is the best advice that you have given to your children?

The best advice that I received while I was growing up was to dream big, work hard, perseverance, and have an open mind, and most of all to absorb knowledge, read voluminously, communicate clearly and above all have the courage of convictions. That is what I have tried to teach my sons.
Have you faced any specific challenges in your job as a woman?

Not really. The contribution of women in Indian foreign service has been increasingly recognized. When I started in the Indian Foreign Service 40 years ago there were very few women. Now, more and more women have come in the foreign service and taken on the responsible positions. I was the first woman spokesperson of the Indian foreign ministry .It showed the open mindedness and fairness of the ministry.
What is your message to women and men around the world after the recent gang rape in New Delhi? Are you asked about this gruesome crime during your public and private meetings?

We need to oppose the violence against women—not just as women but as responsible citizens. India is taking steps to tighten the law enforcement and bring in a force that will not tolerate but punish violence against women severely. There is widespread awakening in our society.
Did you have any mentors? If yes, who and how they influenced you?

No, not really. I had a very simple life and dreamt big. My mom used to help me with math, but I was very self-motivated.
You have been called “grace” under pressure. How do you handle stress and how do you prepare yourself when dealing with any stressful situation?

It is just like going for an exam. You prepare well, understand the subject well, know the nature of the audience and opposing sides, compose your thoughts, and most importantly have complete command of the subject. Be knowledgeable and understand where you need to be flexible and where you need to be firm. Be a good listener. Very often we do not listen to the other side. Learn to articulate well.
Which woman leader or character has inspired you the most?

Many leaders have inspired me. Not just women. When I was growing up Srimati Indira Gandhi was prime minister and she was one of the people who had a very large presence.
You are known to be a patron of music and arts. Do you still play guitar or any other musical instrument?

I do not play guitar anymore. I love music and listen whenever I have time. I love Carnatic, Hindustani and Western classical music.
Tell us more about your interest in poetry. Your first book was “Rain Rising.” Do you have any plans for another book?

I would certainly like to write more poetry when I have time. The Malayalam translation of my book is coming out soon and is very special for me as I am a Malayali.
Where is home for you .Where do you plan to retire?

We plan to retire in Bangalore.
Hindsight is 20/20. Do you have any regrets or is there anything that you wish you had done differently in your life?

Believe in yourself and power of your dream.
Ambassador Rao’s response to “Rapid-Fire Questions”:

Work is … dedication.
Family is … caring and commitment.
Love is … indivisible.
Fame is … transient.
Marriage is … for keeps.
Money is … not for misusing.
Home is … where I love to be.
My favorite travel destination is … Kerala.
My favorite hobby is … reading and music.
My favorite quote is … “Datta, Dayadhvam, Damyata” from Upanishads (generosity, compassion and control).
My favorite movie is … “Gone with the Wind” and “Mughal-e-Azam.”
My favorite song is … “Over the Rainbow.”
My favorite singers are … Bombay Jayshree and Eva Cassidy.
My best quality is … perseverance.
My weakness is … expecting perfection.
Secret of my fitness is … lots of water, staying on your feet and understanding how far you can push yourself.
Secret of being a good boss is … to be firm, inclusive and compassionate.
My favorite authors are … Jane Austen and Charles Dickens.
What I want to do next in my life is … more time to read and write.
My last word on Chai is … keep smiling like Manju.

Every life has a story, share it with INDIA New England over “Chai with Manju,” an exciting, innovative and riveting series featuring interviews with some of the most interesting, active, accomplished, amusing and entertaining men and women. Conducting the new interview series is Dr. Manju Sheth, a well-known physician at Beverly Hospital and INDIA New England’s 2011 Woman of the Year. She is also president of Indian Medical Association of New England. Sheth leads and is involved with numerous professional groups, charities and advocacy organizations, and will be profiling people who have compelling stories to tell.