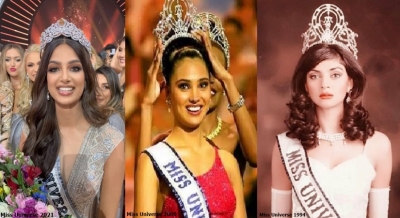 New Delhi– Harnaaz Sandhu’s Twitter bio reads, “Shine like the whole Universe is yours,” and it certainly is, as she was crowned the 70th Miss Universe at the Universe Dome in Eilat, Israel.

Sandhu is the third winner of the title from India, after Sushmita Sen and Lara Dutta who won the prestigious spot in 1994 and 2000 respectively.

Former Miss Universe Lara Dutta congratulated her on her victory, tweeting, “Congratulations @HarnaazSandhu03 !!!! Welcome to the club!!! We’ve waited 21 long years for this!!! You make us So So proud!!! A billion dreams come true!! @MissDivaOrg @MissUniverse”

Following Sushmita Sen, actress Lara Dutta Bhupathi became the second Indian to win the title. She was crowned the 49th Miss Universe in Nicosia, Cyprus. She later made her Bollywood debut in 2003 with the film “Andaaz.” Lara was last seen in the new film “Bell Bottom,” which stars Akshay Kumar, Vaani Kapoor, and Huma Qureshi.

Sushmita Sen, the first Indian woman to ever be crowned Miss Universe in 1994 in a glittering ceremony in the Philippines, has yet to make a statement and is currently promoting the second season of “Aarya”, a hit series on an OTT platform. Sen has two adopted daughters, Renee and Alisah.

Much like her predecessors, Sandhu revealed to IANS earlier this year that she too has Bollywood aspirations.

We wish the 21-year-old a successful reign as Miss Universe. (IANS)