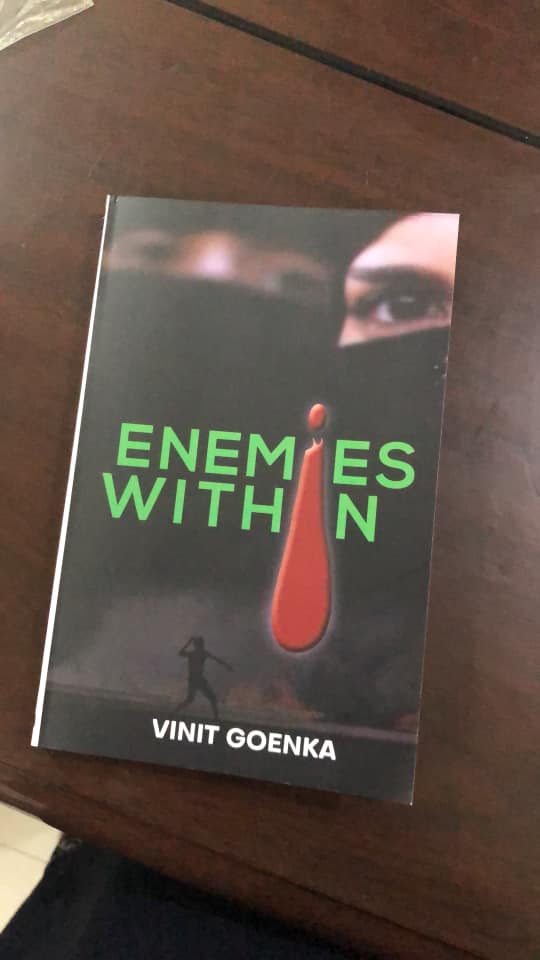 New Delhi– “Enemies Within” is an upcoming book written by Vinit Goenka and published by Author Vine. Through this book, author Vinit Goenka has tried to highlight that democracy is facing danger from the enemies within.

In the book, he enumerates some incidents about how India historically has been under the spell of such influencers either through the educational materials, history books or the media or strategic positions. He has also quoted some news reports and incidences that will make readers ponder about how individual narratives are built.

Goenka says, “Since time immemorial, India has been a land of diversity, welcoming all religions, adjusting and co-existing with all cultures, adopting new traditions, respecting humanity, and animals. But over the past few years, especially after the general elections of 2014, a narrative has been propagated by sections of society to demean India on the global map, create communal disharmony, spread misinformation, and divide India.

“The articles and opinions in leading international and Indian newspapers by journalists and columnists have labelled a duly elected Government of India at the Centre as a Hindu nationalist government. Those statements are by itself an insult to the electorate of India who has followed the due process of free and fair elections. India is the largest democracy in the world, but a fear is created that ‘democracy is in danger’ in India since this government has been elected.”

“A deliberate and concerted attempt has been made to create issues out of non-issues by building a mountain out of a molehill. Traditional cultural beliefs of Indians especially ‘Sanatanis’ have been challenged in several forums, on media channels or courts of law. False narratives about the insecurity of specific sections of the minority community, especially Muslims have been built and propagated; small one-off unfortunate incidences are blown out of proportion as selective hate crimes against the Muslim community; citizens protests are fuelled, students are instigated to do violent protests, constitutional bodies, including the office of the Chief Justice of India, Courts of law and judges are challenged.

“Questions are raised on institutions just because it doesn’t suit the ideology of a select few. The purpose of these so-called writers, thinkers, and influencers is to show India in a poor light as a country that does not have the respect for human rights, a government that disrespects and victimises the second majority community, and oppresses the poor and tribals resulting in their taking up arms against the current establishment.

“The desirable result expected by them is hate speech amongst communities on social media and other platforms, protest, riots, vandalism, separatist movements, naxalism, communal anger, and loss of lives, thereby, projecting India as a country that does not respect civil liberties under the current government and is a Hindu majoritarian state,” says the author.

The book has 16 chapters covering topics such as: “The colonisation of Indian minds” a chapter on Indian media, “The deliberate distortion of Indian history”, a chapter about our educational system, Chapter three about “Naxalism and existential crisis”, Chapter four an interesting introduction to the term “Professional Protestor”, Chapter five, “The Bhima Koregaon expose”, about how casteist fault lines were triggered.

Chapter six of the book that makes readers think about how “Shaheen Bagh protest is Islamist supremacy and Hindu phobia”, chapter seven on the “Content on social media has caste and religion but terrorism doesn’t”.

Chapter eight has an interesting take on “When stones become wallets in hands of the Jamia Millia Arsonist” and how narratives are changed. Chapter nine, “Secular Lynching V/s Communal Lynching”, chapter ten “When Jai Shri Ram becomes a war cry but La-ilaha-illallah-muhammadur-rasulullah is an emotional call”.

Chapter 11 of the book, “The Tale of Two coconuts”, how a coconut breaking ceremony becomes a victim of narrative, chapter 12 “The wolves in sheep’s clothing”, a thought-provoking chapter that exposes some ideologies and people, chapter 13 talks about “The Triple Talaq, CAA, Article 370 Abolition, Ayodhya verdict”, that tries to see the correlation of all these incidents. Chapter 14 says “Systematic effort to create disbelief in Indian Armed forces”, highlighting how armed forces are targeted in India, Chapter 15 talks about “When Terrorism is glorified and encountered terrorists are addressed as victims”, and finally chapter 16 on “when educational institutions are breeding grounds for anti-India movements”.

The author ends with a note that says the time has come for India to identify and fight these forces, the enemies within. (IANS)