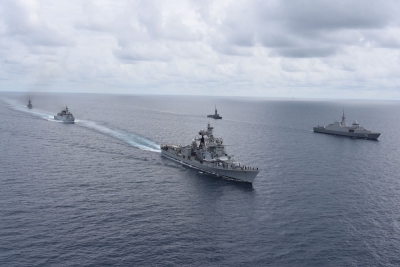 Sri Lanka Navy stated that six ships of the Indian Navy’s First Training Squadron with more than 750 Indian Navel personnel arrived at Ports of Colombo and Trincomalee for a bilateral naval exercise with Sri Lanka Navy.

SNC is the Training Command of the Indian Navy which conducts the entire range of naval training for officers and sailors, including those from friendly foreign countries. As one of the finest destinations for training, Indian Navy has trained more than 11,000 international trainees from over 40 countries in the last four decades, Indian High Commission in Colombo said in a statement.

The Admiral is to meet the senior leadership in Sri Lanka and to visit Colombo, Trincomalee and Galle where there are major Navel bases of Sri Lanka Navy. During the visit interaction with key Area Headquarters is planned in addition to visit at Naval and Maritime Academy at Trincomalee, High Commission stated.

The massive crew of all six ships include 75 officers, 153 officer cadets, 10 NCC cadets and 530 sailors. During their stay, a series of professional, training, cultural and sports interactions are scheduled between the ships’ crew and Sri Lanka Navy personnel. The ships would depart on October 28.

“The crew members of the Indian Navy’s Training Squadron are also expected to visit tourist attractions in Sri Lanka in conformity with the bio-bubble concept,” Sri Lanka Navy said.

Sri Lanka Navy will conduct several training exercises with the visiting Training Squadron of the Indian Navy in Colombo and Trincomalee and these exercises will be held adhering to Covid-19 protocols, the Navy added. (IANS)