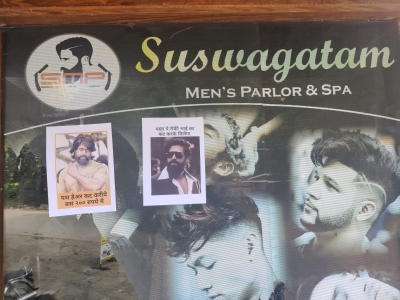 Mumbai– If ‘KGF 2’ catapulted Sandalwood star Yash to national fame, a big part of the credit goes to his swag and rough looks styled to perfection, complete with his long hairlocks and flowing beard.

The movie might be history (after making box-office history), but the look continues to trend at hairstyling saloons. So much so that saloons all over have listed the look among their offerings to customers.

Yash’s Rocky Bhai haircut and beard from ‘KGF 2’ has become the rage in saloons across the nation, according to industry sources. This kind of interest was earlier seen in the 1970s for Amitabh Bachchan’s haircut when he ruled the box office with blockbuster movies.

Rameshwar Sen, who owns a saloon in Malviya Nagar, Jaipur, shared the kind of response he is getting from customers for a Yash-style haircut and bread.

Sen said: “Rocky Bhai’s haircut is the rage. It is the hairstyle that is trending nowadays. The customers are asking for it regularly. This kind of a craze for a star’s hairstyle was visible only for Amitabh Bachchan’s cut, which was famous in the ’70s.”

Apart from creating trends with his style, Yash went on to rule the box office with the biggest opening of Rs 54 crore in the Hindi market on the very first day. Ever since the pan-India star booked such a big opening, he has also created a trend on Twitter as he owned the title of ‘Y54’ on his name. (IANS)

Our designs encourage one to flaunt their best beautiful self: Ridhi Mehra

Rubies are a girls’ best friend

The perfect hair colour as per your zodiac sign