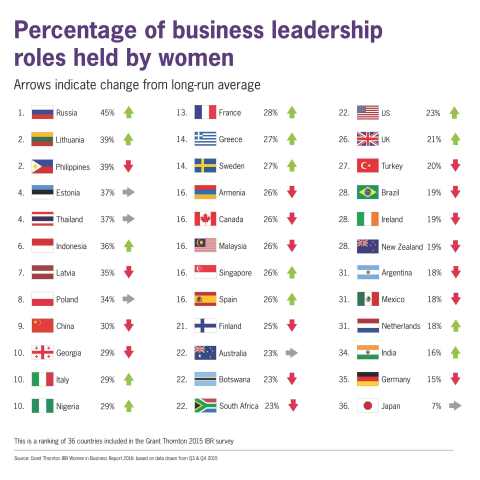 CHICAGO–When it comes to the percentage of senior-management roles held by women, the United States is far behind much of the world, including such surprising leaders as Russia, the Philippines and Lithuania – according to Grant Thornton’s Women in Business 2016: Turning Promise into Practice report.

The annual report – released for International Women’s Day – found that women hold only 23 percent of U.S. business-leadership posts, a lower percentage than 21 of the 36 other countries surveyed for the report. India ranked 34th.

Globally, the percentages varied dramatically from nation to nation: Russia held the top spot with 45 percent of senior-business roles occupied by women; and Japan held the lowest spot at 7 percent.

The report found some positive news for the United States, with the percentage of senior roles held by women moving up to 23 percent from last year’s 21 percent figure. However, the report also cautioned that the proportion of U.S. businesses with no women in senior management is almost one-third (31 percent) – a figure that mirrors the 33 percent global number.

“The fact that about a third of businesses have no women in senior-business roles speaks volumes,” said Erica O’Malley, national managing partner of Employee Benefit Plans and People Experience at Grant Thornton LLP. “It means a third of businesses still have no female input into executive decisions and no women helping grow the business at a leadership level.”

The report also points out that diversity is not just “the right thing to do,” it’s also good business, and can improve the bottom line. Previous Grant Thornton research cited in the report found that publicly listed companies with male-only boards in the United Kingdom, United States and India are forgoing potential profits of $655 billion.

So how can businesses change? According to O’Malley, part of the solution may be to “stop relying on top-down leadership structures and move to ones that are more collaborative.” She also suggested that companies could do more to make leadership appealing to women. This includes “redefining leadership in recognition of the different ways men and women view the skills good leaders need.”

The full Women in Business 2016: Turning Promise into Practice report offers additional recommendations to help businesses turn diversity promises into reality. It is available at www.GrantThornton.global – and an infographic of the country rankings is available at grantthornton.com.

The report’s findings are drawn from data collected quarterly for the Grant Thornton International Business Report.