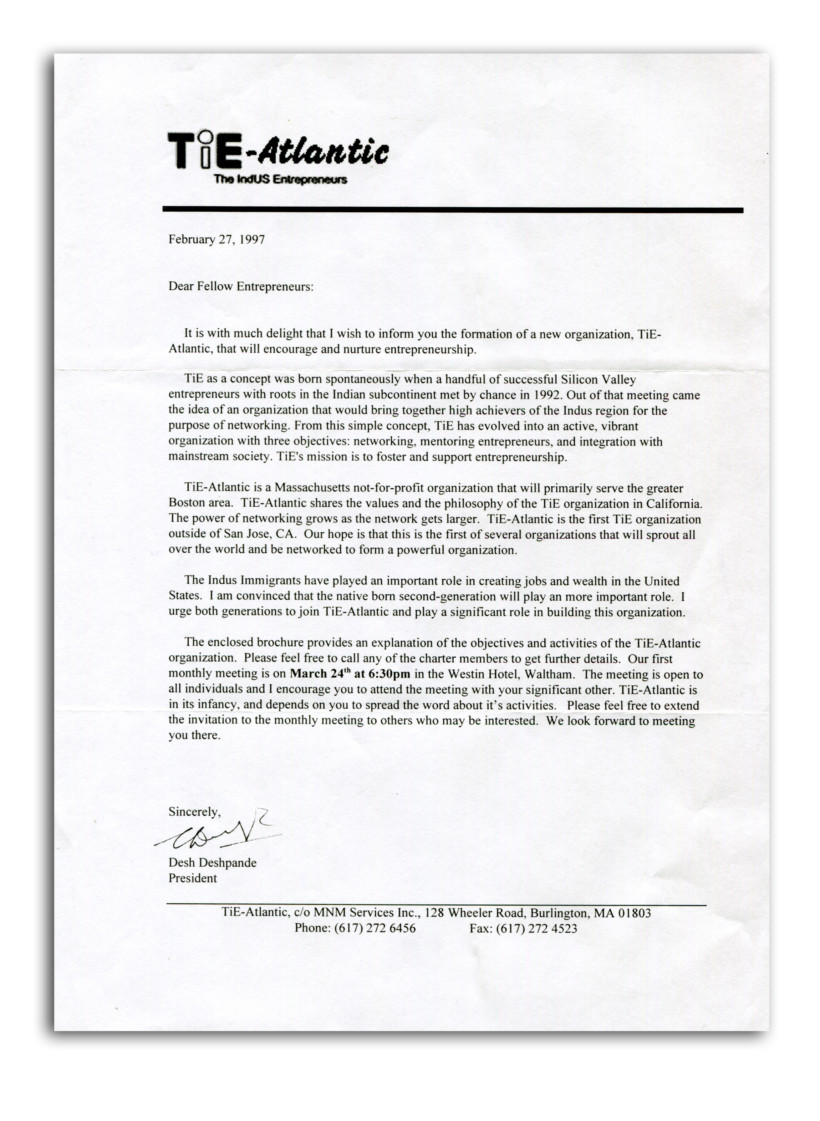 The Indus Entrepreneurs was founded in Silicon Valley in California in 1992, and was in full swing by 1996. Rahul Singh, who lived in Boston but had taken an active role in the formation of TiE on the West Coast, was interested in starting a chapter of TiE in Boston.

Mr. Singh approached Ramesh Kapur, Samir Desai and a few other Indian-American entrepreneurs in Boston, and then they went to rising technology star Desh Deshpande with their intention of starting TiE’s Boston chapter. After meeting a few founders of TiE on the West Coast, Mr. Deshpande signed up to be the president of the TiE chapter in Boston, which officially launched in 1997 as TiE-Atlantic.

“It is with much delight that I wish to inform you the formation of a new organization, TiE-Atlantic, that will encourage and nurture entrepreneurship,” Mr. Deshpande wrote in his first letter addressed to Fellow Entrepreneurs. The letter was dated Feb. 27, 1997.

How right was Mr. Deshpande?  Today, TiE is the largest global not-for-profit network fostering entrepreneurship, and has over 60 chapters in 18 countries. TiE has 12,000 members throughout the world, and has contributed over $250 billion in wealth creation.

Mr. Deshpande’s letter had enclosed a brochure, providing an explanation of the objectives and activities of the TiE-Atlantic, and announcing the first monthly meeting of TiE-Atlantic on March 24th, 1997 at Westin Hotel in Waltham, MA. The brochure on back had listed names of 13 founding Charter Members in alphabetical order:

Samir Desai and Ashok Kalelkar took the lead role in organizing the first TiE-Atlantic meeting in March 1997. Mr. Desai’s office in Burlington, MA served as the makeshift office for TiE-Atlantic.

TiE-Boston started in the offices of founding charter member Samir Desai with time and effort from not just the early members but by their spouses, including Nilima Desai, who was wearing multiple hats as an admin, finding venues and negotiating contracts for the first three years of its existence. Without their passion and selfless commitment, TiE would not be where it is now.

In later years, TiE-Atlantic changed its name to TiE-Boston and annual TiECon became  TiECON East and later to TiE StartupCON.