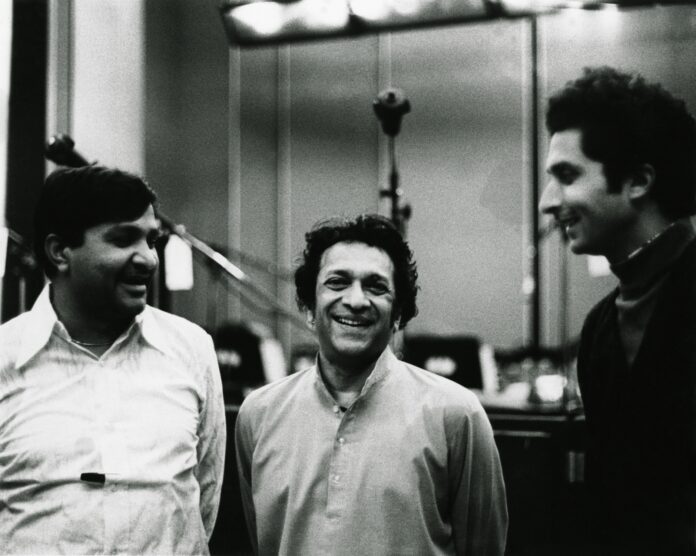 In the fifty years that I have known Pandit Shivkumar Sharma, who is lovingly addressed as Shivji, I must have witnessed at least two hundred of his recitals and each time it has been more or less the same experience.

Curtain opens — he enters, sits on the dais with folded hands, looks around at his audience with a confident smile and the whispers start: “Wow! How handsome!”, “What a personality”, and so on. Very few people know that Shivji is certainly impressive but not just externally. His internal strength — spiritual, intellectual and emotional — has revolutionised the music world.

Until about sixty or seventy years ago, the santoor was hardly known to anyone connected with Indian classical music, even though musicologists trace its origin to centuries ago when a string instrument called the ‘shata-tantriveena’, or veena with hundred strings, was in existence.

Later, somehow the santoor got popular only in Kashmir and for centuries has been used there mostly as an accompanying instrument for vocalists singing ‘Sufiana Mausiqi’, or music related to the Sufi philosophy. Occasionally, the santoor is still used as a solo instrument in Kashmir but only to play Sufi music. The word santoor, derived from Persian, also means a hundred strings.

Instruments similar to the santoor are found in different parts of the world but with different names. In China it is called ‘yang quin’, in Germany ‘hackbret’, in Greece ‘santoori’, in Hungary ‘cymbalom’, and in Iran and Iraq, it is known as ‘santoor’. In all these countries the instrument has around one hundred strings. It is only in the valley of Kashmir that it has exactly a hundred strings. This fact also establishes the link of the Kashmiri santoor to the ‘shata-tantriveena’.

It is quite possible that the instrument got its present name, santoor, because of the Persian influence in India during the twelfth or thirteenth centuries. Some musicologists, however, do maintain that the santoor originated in Iran. Indian musicologists and some ancient music sculptures establish that it is an ancient Indian instrument.

Perhaps gypsies travelling from India to Europe and other parts of the world carried this instrument with them and it was adopted by some of those countries with a different name and shape.

Shivji is the son and disciple of the late Pandit Uma Dutt Sharma, who belonged to a family of priests and later turned into a musician. He lived in Jammu and was trained by the legendary musician Pandit Bade Ramdasji, one of the all-time greats of the Banaras gharana. Pandit Uma Dutt Sharma was not only a learned vocalist but also an accomplished tabla, harmonium and esraj player.

In the early fifties he was the music-in-charge of Radio Srinagar. It was during this period that he did extensive research on the santoor and started teaching his son, Shivji, the intricacies of the instrument, particularly in relation to Indian classical music. He taught classical music to Dr Karan Singh, the ex-Maharaja of Kashmir, as well.

Shivji was introduced to music at the tender age of five. He was first taught vocal music, then the tabla and finally the santoor. His performing career started as a tabla player, broadcasting from Jammu and Srinagar radio stations.

While Shivji devoted his life to music, he did not neglect academics and studied for a Master’s degree in Economics from the Jammu & Kashmir University. Given the kind of intellectual and spiritual background he came from, it is not surprising that he finally decided to accept the challenge of playing the santoor as his main instrument.

To him goes the credit of converting the santoor to one of the major instruments of Indian classical music. Till then only the sitar, the sarod, the shehnai, the flute and the violin were considered major instruments, with the sarangi being used mostly as an accompanying instrument to vocalists.

The santoor had many limitations such as striking the strings with mallets only and not with fingers. This made it difficult to produce the vital effects of the important ‘kriyas’ (actions) of classical music, such as ‘meend’ (a glide) and ‘gamak’ (a kind of musical jerk).

Shivji experimented on the santoor for years in order to enhance its tonal quality and its string arrangement with a view to improving the playing techniques, but without interfering with the inherent character of the instrument and maintaining the conventional techniques of playing.

In Kashmir, musicians keep the santoor on a wooden stand in front of them while playing it. This provides an extra resonance, which is often disturbing. Shivji was the first musician to keep the santoor on his lap while playing and this helped to eliminate the resonance. Placing a weight of eight kilograms on the lap is not easy. Further, it has to be played for hours at a time.

Indulging in delicate intricacies and skills with perfection needs an extraordinary strength of posture as well. To achieve this, Shivji had to turn a yogi not only in terms of physical ‘asanas’ (postures in yoga), but in meditation as well. Till today he practises yoga in its purest form.

Shivji is responsible for having changed the string arrangement of the santoor by using thirty-one bridges, instead of twenty-five, and reducing the number of strings from hundred to ninety-one. The modified santoor was thus able to get three clear octaves and chromatic tuning.

Shivji also insisted that the two mallets must be held in the conventional and particular manner, between the trigger and the middle fingers. Any other way of holding the ‘kalam’ would interfere with the instrument’s desired tonal quality. With this, he changed the history of the santoor, its stature, its appeal and attraction to music lovers. He was also able to change the instrument’s emotional and spiritual expression, which gave the santoor a new identity.

(An extract from the chapter “Shivji’s Tryst with the Santoor” by Vijay Kichlu from the book “Shiv Kumar Sharma: The Man and his Music”. Edited by Ina Puri for Niyogi Books. Reproduced with the permission of the publisher.) (IANS)