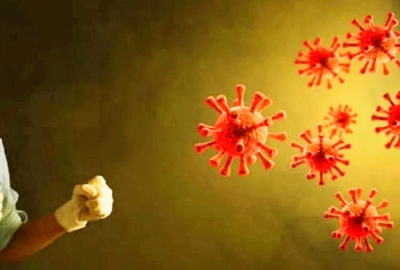 London– Hungarian scientists have stumbled upon traces of the early versions virus that may have been manipulated in a Chinese lab, giving fresh momentum to the pandemic’s lab leak theory, media reports said.

The team from Eotvos Lorand University and the University of Veterinary Medicine, in Budapest, have discovered traces of a unique variant of coronavirus while examining DNA from soil from Antarctica that had been sent to firm Sangon Biotech in Shanghai, Daily Mail reported.

They also found genetic material from Chinese hamsters and green monkeys, which may suggest the virus was being examined in a lab, using either the animals themselves or their cells.

The findings, not yet peer-reviewed, were made accidentally while examining DNA from soil samples collected from Antarctica in late 2018 and early 2019 in a completely unrelated research project.

The samples had been sent to company Sangon Biotech in Shanghai to be analysed in December 2019, where a ‘barcode error’ saw them become contaminated with previously unseen coronavirus mutations, the report said.

The machine being used to analyse the samples has been known to suffer barcode reading errors — meaning samples from two different projects can be mixed together.

In this case, the Antarctic soil is believed to have been mixed with the DNA from lab monkeys or hamsters carrying coronavirus.

The Sangon facility is thought to be used by Chinese researchers, including those at the Wuhan Institute of Virology (WIV) — the lab at the centre of the accidental leak hypothesis.

According to some experts, the new mutations bridge the gap between the original bat coronavirus and the one that jumped to humans — the missing piece of the puzzle that has escaped scientists for the past two years.

But others believe the contamination came from samples of China’s early Covid patients, who were announced in December 2019.

A yet another theory is that the genetic material is from other animal-borne coronaviruses that were circulating at the time or being experimented on by the Chinese.

The Hungarian team who found the sample error say the virus could be the ancestor of the original Wuhan strain, if the mistake happened in December 2019, the report said.

According to Professor Lawrence Young, a virologist at Warwick University, the finding was “very, very intriguing and very, very suspicious”.

While this is no definitive proof that Covid was engineered in a lab and released, it signalled that coronaviruses were being studied in Chinese labs very early in the pandemic, Young was quoted as saying.

“The two things that really stand out for me are there are these three key mutations bringing the bat Covid closer to the first Wuhan strain. It is very very suspicious (and could be) a signature of the ancestral SARS-CoV-2,”he said. (IANS)