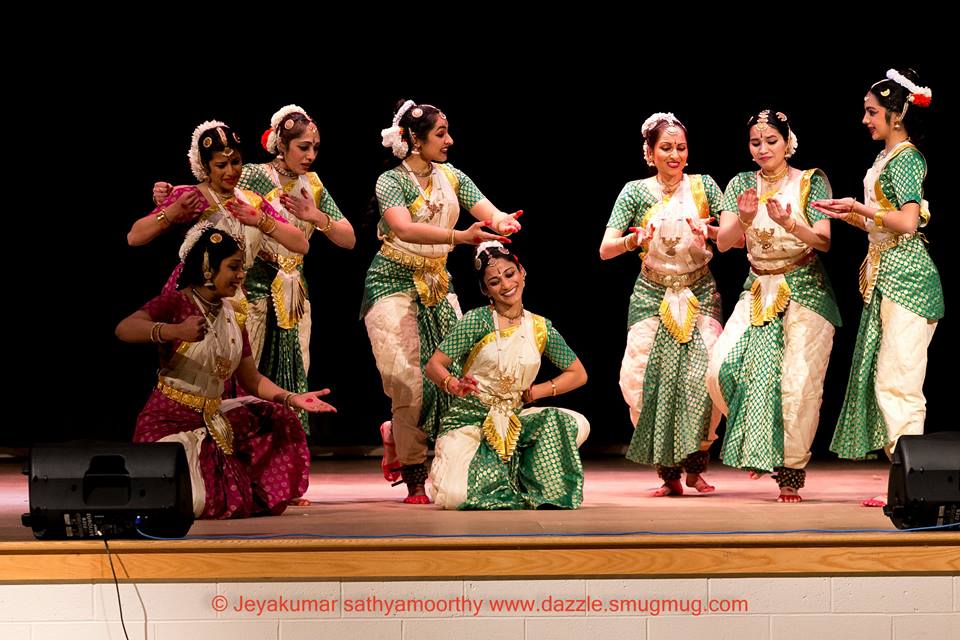 NORTHBOROUGH, MA– Sankara Healthcare Foundation, Inc. raised about $10,000 to help Chennai’s flood victims. “New England For Chennai” event was organized at Algonquin Regional High School in Northborough, MA, to raise funds for relief work to Chennai and nearby areas that were affected by the well-known Chennai Floods.

This event was the brainchild of Smitha Krishnan, a young accomplished violinist, who is the student of Delhi Sundarajaran and a PhD student at Tufts. True to its name, this event featured outstanding programs by our New England teachers and senior students. The event proceeded very smoothly; transitions between performances were effortless and managed very effectively by Pavithra Giridharan, the lively MC for the evening.

The central themes for the evening were “Karunai” (Compassion), “Mazai” (Rain) and “Suryam” (Sun), and all the performances were geared around these themes

The evening started off with a soulful invocation, beautifully sung by Vandana Rao in Raag Malkauns.

This was followed by a Veena Recital by our own renowned Vainika Smt. Durga Krishnan and her students, very ably accompanied by Mahalingam Santhanakrishnan (Mali) on the mridangam. They started off with a brilliant rendition of a Ghana Raga Malika – Om Shakti, offering obeisance to Shakti, Ganesha, Muruga, Saraswathi, Krishna and Lakshmi. This was followed by Thyagaraja’s Naajeevadhara, in Bilahari, set to Adi Talam. This song was an appropriate metaphor for relief from death and destruction. The concluding piece was an energetic rendition of the Kalinganardhana thillana in Nagasvaravali where the notes on the veena strings and the mridangam beats mimicked Krishna’s dance on Kalinga. This piece was the last thillana composed by Shri Lalgudi Jayaraman.

Shuchitha Rao and her students were next on stage, accompanied by accomplished musicians, Rajesh Pai on the tabla and Ramchandra Joshi on the harmonium. The presentation opened with a blissful Khayaal in Raga Marubihag composed by Padmabhushan Dr. Prabha Atre set to 16 best cycle Teentaal. The rich alaaps in the khayal were followed by Shuchitha’s own Taraana composition and set to 12 beat cycle Ektaal with Sargam and aakaar taans (fast melodic sequences). The Bhajan “Mukunda Mahadeva Gopala Keshava” in Marubihag evoked the essence of bhakti and karuna (compassion). Shri Krishna Govinda Hari Murari He Naath Narayana Vasudevaa” in Yaman Kalyan set to 8 beat cycle Keherwa taal was a fitting conclusion to this hindustani segment.

Uma Shankar, a renowned local carnatic artist and teacher, was up next, accompanied by Smitha Krishnan on the violin, Pravin Sitaram on the Mridangam and Sudarshan Thirumalai on the Ganjira. Uma started with Karunanidiye in Bowli set to misra chapu, a Papanasam Sivan composition, followed next by a Thiruppavai in Varali and then Anandamrithakarshini in  Amrithavarshini. She then presented Suryamurthe in Saurashtram and suitably concluded with couple lines from Aditya Hrudhayam in Madhyamavathi. It was a superb performance by Uma, Pravin, Smitha and Sudarshan in keeping with the theme of the evening.

In the second half of the program, the classical dance performance by very accomplished and talented local artists started off with a bang and appropriately with “Surya kavuthuvam” propitiating the Sun and the elements. This piece was performed very beautifully by Sujatha Meyyappan and her students.

This piece was followed by a very different type of presentation that showed the apparent diversity of the dance forms of Odissi and Bharathanatyam and yet the similarities when we looked beyond the surface. This was done through a Pallavi – a pure dance piece in Odissi. This piece was presented by Jeyanthi Gatraju and Jayashree Mohapatra in ragam Shankarabharanam.

The ensuing solo performance by Sripriya Natarajan Moorthy captivated the audience, with its theme – Veeram (courage). The song began with the declaration that “courage blooms from this good land” and Sripriya’s dynamic presentation reinforced the message that indeed, “courage does bloom from this good land” symbolizing the courage showed by ordinary citizens in the face of adversity.

The next piece was a vibrant dance item, performed by Sujatha Meyyappan, in which nature is brought to life. Subramanya Bharathiyar, who is considered to be one of the greatest Tamil poets of the modern era, describes rain in all its glory and ferocity. This reminded the audience that, how much ever technologically or otherwise advanced we are, respect for nature should be ingrained into the culture.

Many of the pieces presented by Sripriya and Sujatha were choreographed by their Guru Madurai R Muralidharan.

The last item was a presentation of Abhinaya in both Odissi and Bharatnatyam styles followed by the Mangalam. The graceful presentation was delivered by Jeyanthi Ghatraju and Jayashree Mohapatra presenting Vaidesha Vilash, (Lyrics by Upendra Bhanja) highlighting the story of Kevat in Ramayana. Through the course of the presentation, Kevat’s moving declaration “I have taken you across the River Ganga. You take me the river of life. That is my prayer.” was beautifully presented to the audience highlighting not only bhakti (devotion), but also how we all connect to the supreme in our own daily lives when taking opportunities to serve those in need.

The artists worked very hard to put together this event in a very short period of time. Karthik Srinivasan, a great music lover, and supporter of SHF executed on the sound requirements flawlessly. Smitha coordinated every single detail with all the artists with precision, most importantly keeping to time. A group of selfless volunteers came together as a family and helped execute this event in a very professional way. The event was memorialized on camera by Jeyakumar Sathyamoorthy and on video by Saravanan Meyyappan.

The event concluded with a Vote of Thanks by Smitha Krishnan. All in all, this was a very successful event with generous contributions for the cause coming from kind hearted donors and also generous grants for the Chennai effort coming from at least two organizations that deserve a special mention here – The Hindu American Community Service Inc., and Chinmaya Mission Andover. Many supporters, young and old, braved the weekend snow to come and support the artists.