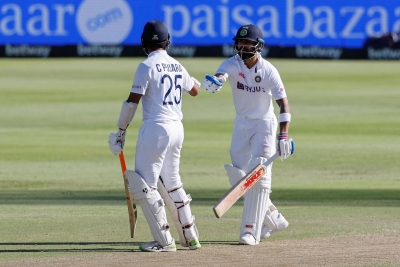 Cape Town– Virat Kohli and Cheteshwar Pujara made it to stumps on day two of third Test against South Africa at Newlands Cricket Ground here on Wednesday. At stumps, India are 57/2 in 17 overs, leading by 70 runs.

India took a narrow 13-run lead as the pace attack shot out South Africa for 210, with Jasprit Bumrah taking 5/42, his seventh five-wicket haul in Test cricket on a pitch which was aiding fast bowlers. Mohammed Shami (2/39), Umesh Yadav (2/64) and Shardul Thakur (1/37) were among the other wicket-takers for the tourists.

With a lead of 13, India almost lost Mayank Agarwal in the third over of the second innings. Agarwal was rapped on pads by a nip-backer from Kagiso Rabada but got to overturn the decision as replays showed the ball missing the stumps.

Agarwal then played a gorgeous straight drive down the ground but Rabada had the last laugh as he dragged the length back and with some away movement, forced Agarwal to play at it and the outside edge went to Dean Elgar at first slip.

KL Rahul, who took two classy off-side boundaries off Duanne Olivier, was stuck at the crease and edged straight to Aiden Markram at second slip off Marco Jansen. Kohli and Pujara digged their heels in to put up an unbeaten stand of 33 to ensure India didn’t lose any other wicket till stumps arrived.

Earlier, with South Africa starting from 167/7, Jasprit Bumrah took his fourth wicket of the innings, getting one to nip into Keegan Petersen, forcing the batter to play at it but the extra bounce on the ball took the shoulder edge to Pujara at first slip.

Kagiso Rabada threatened to reduce the deficit but holed out to Bumrah at long-off off Shardul Thakur. Bumrah completed his second five-wicket haul against South Africa by getting a leading edge off Lungi Ngidi to Ravichandran Ashwin at extra cover, thus setting the match into an innings shootout.