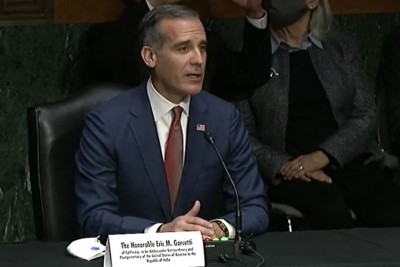 New York– The Senate Foreign Relations Committee on Wednesday unanimously approved the nomination of Eric Garcetti to be the US Ambassador to India, a position that has been vacant for almost a year.

The nomination will now go to the full Senate where a vote is likely soon as Republican Senator Ted Cruz has lifted his procedural hold on nominations that he placed because of his differences with President Joe Biden on a gas pipeline from Russia to Germany.

The committee also approved the nomination of Donald Armin Blome to be the envoy to Pakistan.

Garcetti, the Mayor of Los Angeles, and Blome had appeared before the Committee in December for a hearing at which they outlined their agendas as ambassadors and answered questions from Senators.

But they were not included in the group of about 30 nominations of Ambassadors approved by the full Senate with a voice vote last month.

The Senate Committee had to approve the nominations of Garcetti, Blome and others, including Amy Guttman as Ambassador to Germany, once again on Wednesday as the earlier vote lapsed when the Senate session ended at the end of the year.

Senate Foreign Relations Committee Chair Bob Menendez said: “I believe they are all well qualified and deserving of their nominations. I will be voting for them and look forward to their swift confirmation.”

Even as India’s relations with the US has advanced during Biden’s first year in office, the Ambassador’s position has been vacant since January last year when Ken Juster resigned following the defeat of Donald Trump who had appointed him.

Faced with growing aggressive behaviour by China, Biden has focused on the Indo-Pacific region, where New Delhi has a key role, advancing the Quad, the four-member group of India, the US, Japan and Australia, and convening its first summit.

Menendez said: “Prolonged vacancies are not in our interest. They undermine our national security, hinder our leadership role abroad and benefit only are at the service training to the nominees we are considering today.”

Cruz had been blocking most Ambassador nominations using procedural manoeuvres because of a dispute with Biden over sanctions on the Nord Stream 2 gas pipeline that Russia is building to Germany, but relaxed the hold last month.

Cruz wants Biden to place sanctions on those involved with the pipeline.

Unlike Garcetti, Guttman, who is the President of the Ivy League University of Pennsylvania, did not get unanimous approval from the panel.

The Republican leader on the committee, Ben Cardin, was among those opposing her nomination citing the university’s connections to China.

He said that under her leadership, the university is “really is a poster child for the ongoing in growing malign influence of China and at our institutions of higher learning. The University of Pennsylvania has accepted millions, millions and millions of dollars in donation (and) in contracts from China”.

When he appeared before the committee last month, Garcetti declared that he would “double-down on our efforts to strengthen India’s capacity to secure its borders, defend its sovereignty, and deter aggression” and pointed out that “India is situated in a tough neighbourhood”,

“Few nations are more vital to the future of American security and prosperity than India,” he added.

On issues given greater weight by Biden, he asserted that he would “engage closely and regularly with the Indian government” on human rights and matters relating to democratic institutions.

Garcetti is close to Biden, having been the co-chair of his election campaign committee, and had been expected to join his cabinet, but the Mayor said that he withdrew from consideration for such positions citing the city’s need for his leadership.

He is a former Navy intelligence officer and has taught international affairs at the University of Southern California, and diplomacy and world affairs at Occidental College.

Blome, who is the Ambassador to Tunisia, is a career foreign service officer.

He has experience in the region, having been a political counsellor in the Kabul embassy and an Iran desk officer at the State Department. (IANS)