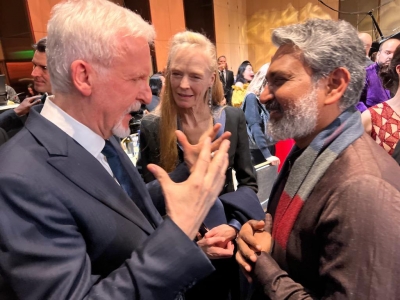 Rajamouli took to Twitter, where he shared two pictures where he is seen sharing screen space with Cameron, who has made films such as ‘Titanic’ and the ‘Avatar’ franchise.

In the first image, the two maestros are seen having a discussion.

He captioned the image: “The great James Cameron watched ‘RRR’.. He liked it so much that he recommended to his wife Suzy and watched it again with her. Sir I still cannot believe you spent a whole 10 minutes with us analyzing our movie. As you said I AM ON TOP OF THE WORLD… Thank you both.”

Rajamouli had earlier had a fanboy moment as he met Steven Spielberg at what ‘The Hollywood Reporter’ Boris Kyt described as an A-list star-stuffed celebration thrown by Universal at West Hollywood’s famous Sunset Tower Hotel.

“I just met GOD!!!” Rajamouli had captioned the image of meeting Speilberg. (IANS)