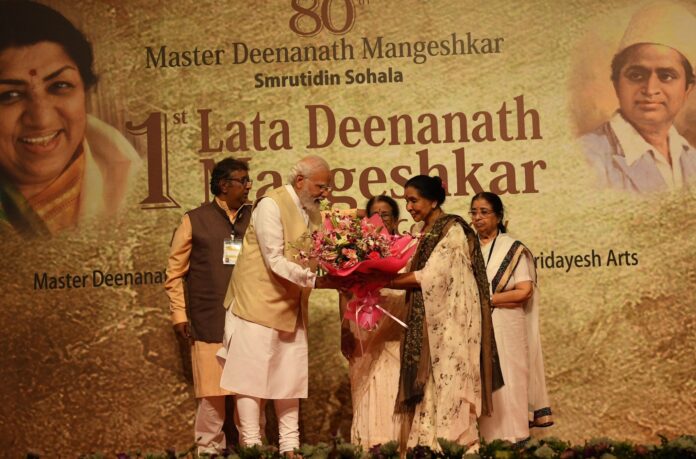 Mumbai– Conferred with the 1st ‘Lata Deenanath Mangeshkar Award’ on Sunday, Prime Minister Narendra Modi paid rich tributes to the late legendary singer, whom he termed his “elder sister” and cherished memories of his association with here.

“I was introduced to her by Master Sudhir Phadke… For me she was my Lata Didi and Sur Samragyi.. I always received love and blessings from her. The oncoming Rakshabandhan festival will be the first without her,” said Modi in an emotional voice, receiving the honour instituted by the Master Deenath Mangeshkar Smruti Pratisthan Charitable Trust and Hriday Arts.

He said he has known the Mangeshkar family for over four decades and Lata Didi was like a ‘Ma Saraswati’ who sang for four-to-five generations of actors, gliding from gramophone records to cassettes to VCD, DVD, pendrive and online, leaving her mark and inspiring aeons.

Narrating incidents and anecdotes, Modi praised the immense contribution to the world of music and culture, saying though her physical journey ended during the 75th anniversary of Indian Independence, she gave her voice to India well before freedom and the country’s passage of 75 years is also associated with her.

Lauding the patriotism strands of the Mangeshkars, the PM said that her father was the source of the conscious love for the country that was within Lata Didi – who passed into eternity on February 6.

He recalled the incident of a song, challenging the British, penned by Veer Savarkar that was rendered by Master Deenanath in a program attended by the then Viceroy in Shimla during the freedom struggle.

“Lata Didi considered music as her ‘rashtra bhakti’ (worshipping the nation) and patriotism was inspired through her songsa like ‘Jai Hind Ki Sena’, and ‘Ae Mere Watan Ke Logon’,” said the PM.

Lauding her long and illustrious career, Modi said that Lata Didi was like “a melodious manifestation of ‘Ek Bharat, Shreshth Bharat’, she sang thousands of songs in more than 30 languages, ranging from culture to faith, east to west and north to south, her notes united the country, and worldwide, she was India’s cultural ambassador”.

The PM said that generally he is not comfortable about receiving awards but when the Mangeshkar family called with the honour in Lata Didi’s name, then he could not refuse and it became a symbol of her love and affection for him.

“As Lata Didi belonged to the people, this award in her name also belongs to the masses… I dedicate this award to all countrymen,” said Modi, who occupied a front row seat in the audience, got up when name was called out, and walked onto the stage and accept the honour.