Yoga is an ancient Indian discipline, which has evolved over thousands of years for physical and spiritual well being of the humankind. The word ‘Yoga’ derived from Sanskrit, means to join or to unite, symbolizing the union of body and consciousness. It has gained worldwide popularity due to its immense health benefits.

It not only helps in improving physical health but also brings about inner peace by reducing stress and anxiety. Medical research in recent years has uncovered many physical and mental benefits that Yoga offers, corroborating the experience of millions of practitioners. The United Nations General Assembly (UNGA) on December 11th 2014 declared June 21st as the International Day of Yoga. The date of June 21st was chosen since this is the summer solstice which is the longest day of the year in the northern hemisphere and has special significance in many parts of the world.

Welcoming the participants to the Yoga Day celebrations, Mr. Sandeep Chakravorty, Consul General of India in New York, said that ‘Yoga for all and all for Yoga’ should be our
motto. He highlighted worldwide momentum that Yoga is gathering in combating lifestyle related diseases.” He added that Yoga is a timeless gift from India to humanity. 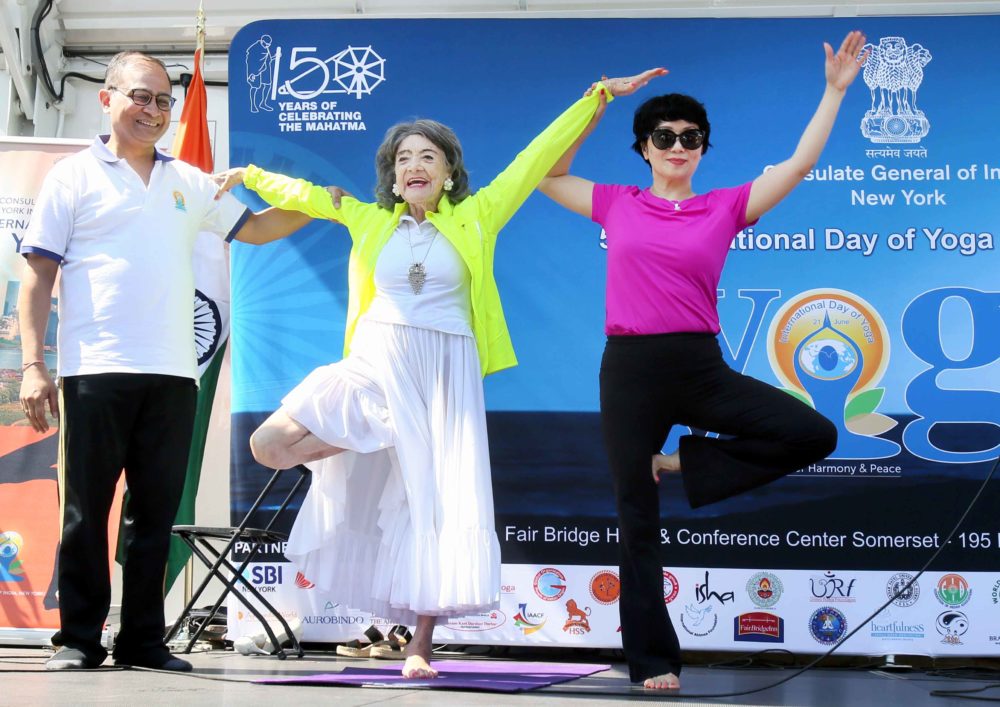 A guided yoga session based on the Common Yoga Protocol was performed by the participants. The session was led by Dr. Dayashankar Vidyalankar, Teacher of Indian Culture at the Consulate General of India, New York. Various other yoga sessions were conducted by professionally trained Yoga teachers.

The Consulate had organized several curtain-raiser events in collaboration with yoga organizations resulting in a record turnout for the Yoga Day celebrations.

In addition to the Consulate’s flagship event, Yoga enthusiasts gathered to celebrate the 5th International Day of Yoga in Pittsburgh, Westchester and Time Square, New York. The Times Square’s Summer Solstice Yoga event saw a gathering of over 11,000 participants.

International Day of Yoga 2019 managed to create a broad based awareness about the benefits of yoga to all sections of the society and also reintroduced the ancient mind-body practice and breathing techniques to a technology driven, fast-paced world. The celebration in Somerset, NJ offered an enriching experience thanks to the energetic performance by yoga schools and associations.

More than 30 organizations participated with the Consulate in the celebration of International Day of Yoga 2019. More then 15,000 people participated in the various Yoga day Celebration this year.