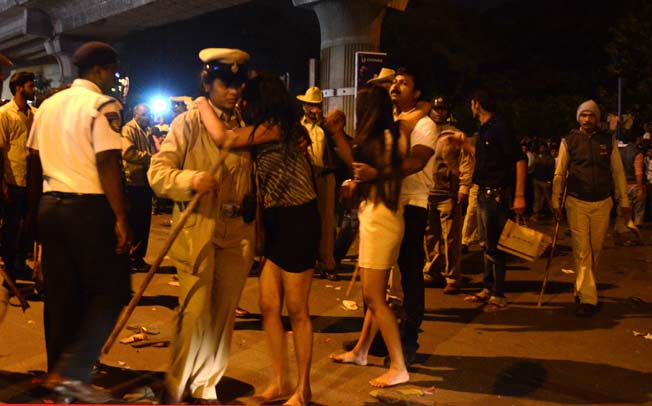 Shillong, India–The glitter of modernity is not without a taint of depravity. What’s too upsetting lately is a new breed of perverts who are wreaking havoc with the society and the modesty of womanhood. They prey upon any females, even kids, anywhere any time. How disgusting, the instances of roadside molestation hardly raise the eye-brows of the pedestrians.

To rub salt on the wound come the sermons from the political leaders hinting that cases of such molestation are not unexpected when females go around at night without fathers, brothers and so on. This is how the womenfolk are round-the-clock under threat.

Again, pornography — in which females are mercilessly humiliated, is doubtlessly another dreadful nuisance which has blotted the pristine landscape of the society now. Though it is never shown in the media as one of the main causes of the increasing menace in the society many sensible NGOs and dispassionate analysts have come up with conclusive findings that reveal — ‘The rise in pornography viewing is directly proportional to the rise in the number of rape cases, sexual violence and the social degeneration’ — as also claimed by a noted gynecologist Dr. Shaibya Saldanha of Bangalore.

There are various kind of rape cases in the country now. A very horrendous news we have heard from Inchauli, Meerut a few months back. A 10 year’s boy allegedly raped a six years old girl. Where did so young boy get to learn about the indecent acts? What has brought him to like such outrageous stuffs and what finally drove him to walk along the forbidden path? He might have initially become acutely inquisitive for several reasons which we —
one-sided sensible lot, just tend to shrug aside.

Yes, if we are truly honest the causes are not too indistinct to be noticed. Well, is it not for an easy accessibility of the pornography on the internet that can be accessed with your android phones? A series of obscene movie footages which repeated boom in our drawing rooms could easily get the tender minds to think what they should not. Again, regular news of fathers/step-fathers stalking upon their own daughters, and school teachers eyeing their students for sexual fulfilment (Kendriya Vidyalaya incident of Meghalaya) have sent chill down our spine about a month back. This kind of shocking story greets us every morning through our local dailies.

Here a serious question, let’s not ignore. Why is there a sharp rise in the viewing of the pornography in INDIA in the past few years? What is so much hot that is sizzling in the country now which never fails to kindle the curiosity of even the teenage to open up the filthy pages on the net? Let’s not bury our head in the sand in the face of this dangerous development — at least for the sake of our descendants, for the sake of the humanity. Or else, we will be equally culpable sinners. Well, will our willful silence against the rise of pornography viewing not bring forth the days of bestiality in which our own children and grandchildren will be living and growing? Will their lives not get devastated by the endless debaucheries, rapes, sexual atrocities, family discords and mental chaos — already a major distress pulling the society down? In such environment, the millions of poor “single” mothers will be forced to lead traumatic lives as in the West.

Well, our mere saying “sick minded rapists”, or arresting and hanging the perverts will not at all solve the problem permanently. We all have to adopt, with all sensibility and sincerity, the comprehensive measures as well that will be helpful to keep the society in a good stead.

Let me beg for your considerate attention here. When an epidemic “dengue” strikes our town, what do we do? Do we not clean our surrounding? This is what the medical doctors suggest first. Apart from vaccinating the sick person, we immediately take all prescribed preventive measures. We extremely exercise caution as to their food intake. We install screens not to let a single mosquito in, and stop leaving the stagnant water in the open such that it never becomes a breeding hotbed and so on and so forth.

Exactly in the same manner, let’s honestly ask ourselves if we have really been doing anything to prevent the evil of “porny-dengue” and the like entering into our society, more precisely, into the mindset of our tender kids and the general masses? Who knows yesterday’s good boy has become pervert today? Has the Government initiated anything that will help prevent us from the sharp stings of “porn-bugs” which might have injected many with the carnal virus? Have we ever put pressure upon the entertainment houses not to immorally sexualize and objectify the womanhood? Some right-thinking lot — never mincing words, remark that it is entertainment industries which have first outraged the modesty of womanhood with the cheery charm of glamour, fame and money. How, where and when is all as clear as daylight if one’s eyes are not blurred by the baggage of modernity.

Yes, apart from the rigorous punishment to the sex perverts, better hanging, the government should consider to initiate the movement to detox the mindset of the masses. “Healthy attitude and healthy acts for healthy society” should be the prime slogan. No sexual predator should strangulate the sacred womanhood and take the society hostage.

(Salil Gewali is a Shillong-based writer and researcher. He rose to fame for his research-based work entitled “Great Minds on India.” The book has been translated into 11 languages. Also a member of the International Organization of Journalists, Gewali has written 19 books including school textbooks. His books have also been recommended as textbooks by Meghalaya Board of School Education in addition to private schools in the Northeast India.)