On July 28 through 30, Nrityanjali founder Jothi Raghavan and her students will celebrate the 40th anniversary of the dance school’s founding with a 3-day festival of Bharatanatyam at the Performing Arts Center of Littleton High School in Littleton, MA.

How did it all start?

Lalitha Mani, a former Bostonian and now a resident of California, remembers it well. As a young kid, Mani was interested in dance and used to read about dance programs in Indian newspapers and magazines while growing up. When she saw Raghavan perform at MIT’s Kresgie Auditorium in mid-1970s, she remembered an article she had read in an Indian newspaper about young Raghavan and her mother, Vimala ramanujam, performing Bharatanatyamdance in India.

“I happened to see Jothi dance at Kresgie and I remembered. Her mother used to dance. I had read about her. When I saw Jothi in Boston, I was thrilled. After the program I reached out to her and asked she would teach Bharatanatyam,” recalled Mani. “She just laughed. She did not say anything.”

A few years later in 1977, Mani met Raghavan again and asked her once more to teach her Bharatanatyam, and this time she agreed.

“I was 27 with two children, and she had to start from the beginning. That is how I began as her student,” Mani said. “Now, we are great friends. We are family.  She is very nurturing person. She gives 100 percent to all her children.”

Daughter of Lakshmi Ramaswamy was also one of the first students of Raghavan.

“Our family became good friends with Jothi and Narasimhan in the mid 70’s, and our relationship was further forged when our daughter, Buvana, became one of Jothi’s first Bharatha Natyam students. Lessons were initially taught from the basement in Jothi’s house with Buvana, Rajani and Lalitha being her only three students,” said Ramaswamy. “Though my daughter doesn’t dance anymore, she has immense appreciation for this wonderful South Indian art. She cherishes her relationship with Jothi to this day and our family is proud to be part of Jothi’s extended dance family.”

Ramaswamy said the bond amongst the students and their guru was strong. They even lived with Raghavan when preparing for their Arangetram in 1979.

“May God bless Jothi with good health, happiness and success in all her endeavors as she celebrates this impressive milestone and continues to enrich our community with the beauty of this art,” Ramaswamy said.

Raghavan admits that she was not trained as a teacher, but learned the art of teaching Bharat Natyam through her love and deep passion for it.

“I was not trained to teach, but when I started teaching I really enjoyed it,” said Raghavan. “When I started teaching, I learned how important for me was to teach in the right way. I did not think what will happen in 10 years. I never commercialized. I wanted each student to have my full attention.”

Well, about 10 years later in 1996, Raghavan had to move to Maryland because of her husband’s job. 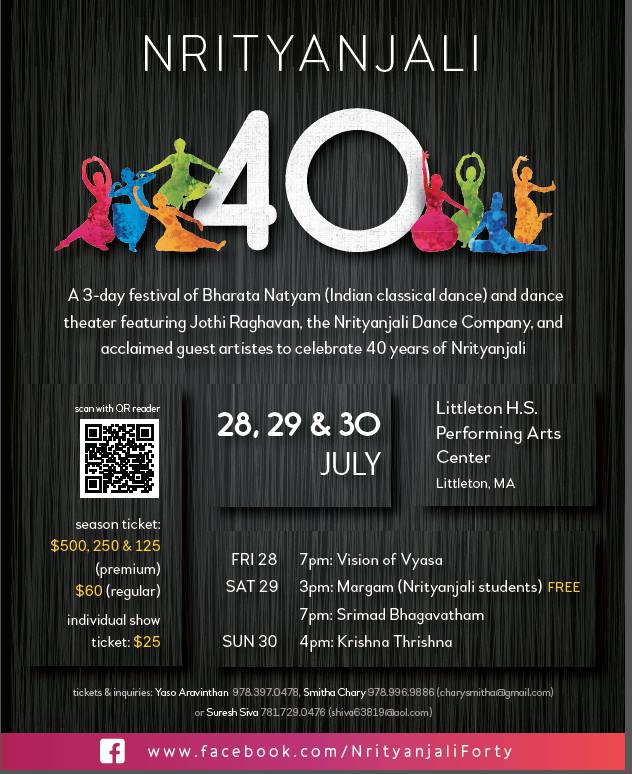 What about her students in Boston? Raghavan came up with an idea and rented a place in Bedford, MA, and continued to commute and teach Boston students. She would drive to Bedford, fly or take bus from Maryland every week or every other week. Sometimes, she stayed in a Bedford motel for weeks or months, especially during the Arangetram of her students.

Raghavan continued to shuttle between Massachusetts and Maryland from 1996 and 2000, when her family moved back to Boston.

During the last 40 years, hundreds of students have graduated from Nrityanjali, and of them over 100 have had their Arangetram, the formal debut on-stage performance after nearly 10 years of training.

Almost all her students are girls.

“I had several boys as my students, but they did not continue,” Raghavan said. “When men dance, they have a lot of passion because they chose to dance.” But despite that men traditionally shy away from learning formal classical dance.”

She said there are many reasons men don’t learn dancing despite their amazing abilities.

“I have heard from male dancers that women get more chances when it comes to formal dance performances. But I like both male and female dancers as long as they are good,” Raghavan said. “Now, male dancers are exploring dance. Things are changing quite fast.”

Raghavan said  that even for female dancers it was challenging a few decades ago in India.

“When my mother started learning, she had to break taboo. When I started, it was much easier,” Raghavan said. “Now, you even have colleges that offer you graduate and undergraduate degrees in Bharatanatyam and other classical dances.”

A master of Bharatanatyam dance, Raghavan has been a pioneer in performing, teaching and choreographing Bharatha Natyam-based programs in the United States and as well as in the birthplace of this classical dance style:  Chennai, India. Raghvan’s passion for Bharatanatyam is reflected in her own beauty, grace and elegance that she brings to one of the most popular dance styles of India.

On July 28, 29 and 30, Nrityanjali will host a three-day Bharatanatyam dance festival at Performing Arts Center of Littleton High School in Littleton. About 60 dancers will participate in the three-day festivities and program. Tickets: $60 (season ticket) and $25 (individual show).

The program is choreographed by Raghavan herself. She is a recipient of Choreographer’s fellowship from the National Endowment for the Arts. She will be curating and producing four of her choreographies in this festival.

Here is a brief information about the program:

Vision of Vyasa  is on 28th of July at 7:00 PM –  Dance theater – an intellectual exploration of Indian philosophy based on Bhagavad Gita – the song of God. Krishna is seen as an enlightener, a Guru.

Nrityanjali Margam is on 29th of July at 3:00 PM. It brings together the movements vocabularies of the traditional Bharthnatyam dance and Carnatic music of South India.

Srimad Bhagavatham is on 29ty July at 7:00 PM.  This dance theater sees Krishna as a Romantic hero who elopes and marries Princess Rukmini.

Krishna Thrishna is on 30th at 4:00PM. This dance theater depicts  the love of a devotee towards Krishna carries beautiful imagery of surpassing beauty, and transcendental spirituality. The love of a devotee is so intense that there are no boundaries between love and devotion, and body, mind and soul yearns to be united with the divine. Krishna is seen as the desire of the devotee.

To watch a Dreamcatchers interview with Raghavan, please click here or on the video below.