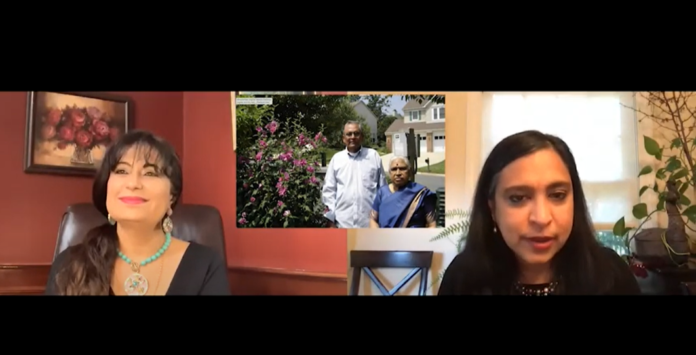 BOSTON—TiE Boston, one of the region’s largest and oldest organizations supporting the Massachusetts entrepreneurial ecosystem, last week elected senior Bank of America Executive and a Social Entrepreneur Anu Chitrapu as its 12 President for a two-year term.

In an exclusive video interview with Chai With Manju, Ms. Chitrapu talks about her own journey in social entrepreneurship, her family and her vision about TiE Boston.

Ms. Chitrapu is Senior Vice-President and Global Procurement Executive at Bank of America. She has won awards at the bank for exceptional performance, been named to the high potential women leaders group and serves as the Executive Sponsor for the Asian Leadership Network in Boston. She is a seasoned and dynamic business leader with a track record of motivating teams to step up their performance and a natural evangelist and influencer with the ability to get people excited about an organization and its mission.

Ms. Chitrapu has been involved with TiE Boston since 2004, when along with a group of other TiE Boston women, she helped create the TiE Women’s Initiative (TiEWIN) with the mission of inspiring and empowering women leaders. TiEWIN brought luminaries like Indra Nooyi to speak at TiE Boston.  She was also part of the TiECON organizing team for multiple years. She became a charter member of TiE Boston in 2006 and joined the TiE Boston board in Jan 2020.

Ms. Chitrapu is passionate about women empowerment, eliminating gender based violence, education for girls and protecting the environment. It was this passion that led to the creation of Nyrvaana, a social enterprise founded by Ms. Chitrapu and her two sisters, with a mission of saving fabric from landfill while providing employment to disadvantaged women.

Ms. Chitrapu was President of Vision Aid, a non-profit organization focused on helping the visually challenged. During her 6-year tenure, she pioneered a unique fund raising model that forms the backbone of the organization’s growth. She is currently on the advisory boards of Saheli and Direct Action for Women Now (DAWN) and is an active member of several Boston based non-profit organizations including American India Foundation (AIF) and Ekal Vidyalaya.

Writing has been a longstanding passion for Ms. Chitrapu and she hopes to increase awareness of social issues through her writing. Her short story, “The Legacy”, shone a spotlight on inequity and social injustice and was awarded second place in an international short story competition. She is also a columnist for India New England News.

Ms. Chitrapu is married to serial technology entrepreneur Rama Ramakrishnan (currently Professor at MIT) and played a vital role in supporting his startups through their lifecycle from founding to successful exit. This first-hand experience imbued in her the business acumen and emotional intelligence needed to support entrepreneurs through their sometimes tumultuous journey from concept to success.

She holds an MBA from MIT Sloan School of Management.