Narrated through the emotional rollercoaster of a love story destined to tragedy, it celebrates Goan music through the eyes of its eclectic’s generation of musicians in the 1960s and 70s. 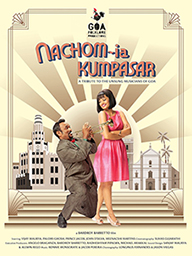 “Lets Dance to the Rhythm is a beautiful representation of another era, where jazz music flourished outside of the realms of the popular Hindi cinema of Bombay. The film is a joyful celebration of the music, the energy and the musicians and it is a story that not many people know about, states Film Festival Director  Aseem Chhabra. “It is truly a happy film and a perfect way for us to launch the 16th edition of the New York Indian Film Festival.”

The festival is widely recognized as the oldest, most prestigious Indian film festival in the United States, showcasing some of the greatest talents working in the diaspora. Celebrating its 16th year, NYIFF will run May 7 to 14 at a variety of prestigious New York City venues, including the Skirball Center for Performing Arts, where the opening and closing films are set to take place.

In addition, the centerpiece and closing films were announced.  Renowned filmmaker Hansal Mehta will be closing the festival with his latest work, ALIGARH.  Director Mehta provides a look into the real life incident of Dr. Shrinivas Ramchandra Siras, who was suspended from his job because of his sexual orientation. Siras was the professor of Marathi at the Aligarh Muslim University. After successfully appealing his suspension, he died under suspicious circumstances.

HIGHWAY will be featured as the centerpiece film. Umesh Kulkarni’s HIGHWAY is a Marathi film set on the Bombay-Pune Highway and it examines diversity and soul searching.

Aroon Shivdansani, Executive Director and Artistic Director of IAAC states “The excitement is growing as our festival approaches!  Our flagship event, NYIFF 2016 is proving to be even more exciting than last year!” She adds “The recently announced Indian National Awards included both our 2015 Opening & Closing Night films as well as five films from our current schedule.  This year our festival has grown in the number of days, the number of films screened, as well as the depth and variety of themes and languages.  Three theatres will screen films simultaneously all day for 8 days with films from all over India and the subcontinent representing myriad regional languages (with English subtitles) while the fourth theatre will entice audiences with fascinating panels on LGBT, Regional Language Cinema, Directors’ First Films, Animation, Industry Panels on Shooting in NYCity & NYState as well as Special Events such as the presentation of films from three generations of filmmakers in the Bimal Roy/Basu Bhattacharya family.  Guests to our Opening & Closing Night Galas will be welcomed by amazing local dancers, while filmmakers & celebrities walk off the red carpets to glamorous cocktail parties prior to the reality screenings.”

The full line-up of screenings and events will be announced April 10, 2016.