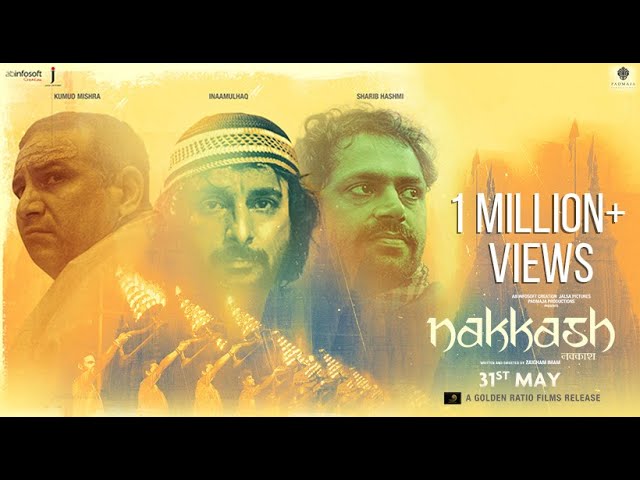 Varanasi has hosted many recent films. “Nakkash” takes us into the uncomfortable and ruinous realm of the communal divide. It steps in the thorny theme without prejudice and with complete awareness of going down a road that offers no solace from the harsh sun.

There is a liberating sense of innocence in Zaigham Imam’s tale of worship and duplicity, of politicians and priests, and the uneasy alliance between politics and religion, of single parenthood and post middle age marriage.

Above all, “Nakkash” is the tale of friendship between two men of lowly means — Allahrakha (Inaamulhaq), a craftsman who carves figures in gold on temple walls, is a single father who is raising his little son with the help of his best friend Samad (Sharib Hashmi).

It is heartwarming how the little boy refers to his father and his father’s buddy as ‘Abba’ and ‘Ammi’ without any sexual connotations attached to the endearment.

That the two roles are played by two very fine actors Inaamulhaq and Sharib Hashmi helps give their relationship a heft and resonance we seldom see in cinematic friendships. The course of their friendship, as it is challenged by devastating communal issues, runs through the narrative with vigorous fidelity, found to be absent in other plot points of this film.

For instance, the political goon Munna (Pawan Tiwari) is written purely as a radical villain with no dimensions.

Perhaps, the director has taken on more than he can handle. The burden of bringing together so many issues with such thundering ramifications is not an easy task. And well, who said life can be easy? Several episodes do appear to lack subtlety, a quality in short supply when a society is rapidly running out of excuses to stay together.

The third remarkable character and performance in this uneven yet persuasive drama of prejudice and redemption is the temple head priest Vedanti, a pacifist who believes all religions must be respected. As played by the ever-powerful Kumud Mishra, Vedanti is a compelling force of secularism whose politics of communal harmony is so raw it leaves us wounded. Mishra’s performance reminded me of Pankaj Kapur in Bhavna Talwar’s “Dharma”.

“Nakkash” is a film with lots of jagged edges. The politics of communalism that the writer-director so forcefully derides, tends to render the narration shrill at times. But the rough edges never wound the film’s honest intentions.

The three principal performances stay with us for their honesty, integrity and a representational resonance that doesn’t take away from each character’s individuality.

This is a film that has something very crucial to say. We better listen before it’s too late. (IANS)