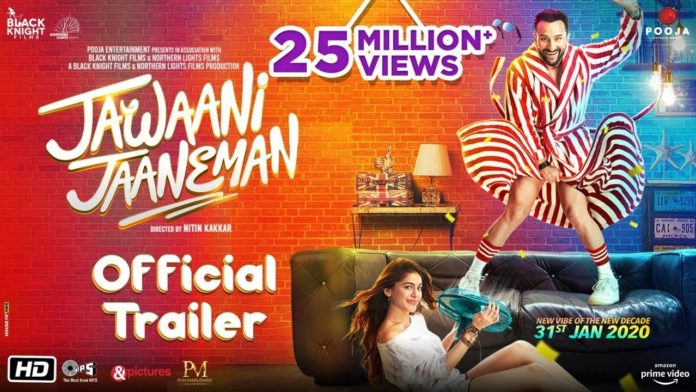 “Jawaani Jaaneman” turns the classic coming-of-age drama on its head. Reversing formula, here is a parent who grows up to appreciate the values of commitment and responsibility, upon the entry of a child in his life.

If Saif Ali Khan has been struggling to reinvent his cool dude image for a while now, this self-produced project lets him do so with aplomb. Here, the actor plays out what his trademark loverboy of so many films of the past (think “Dil Chahta Hai”) would be, if he was still single and ready to mingle at 49.

Nitin Kakkar’s new directorial effort centres on a father-daughter equation to create a new-age relationship dramedy that thrives on quirky characters and situations. Outstanding among these is Tabu’s cameo act. She essays the most maverick movie mom you have seen in a while, and proves once again that the ability to steal the limelight from among an assorted cast is an innate talent that has nothing to do with footage.

The script, however, was always written for Saif Ali Khan, imagined here in a Casanova mode as Jassi, a spirited property broker in London. Life is an unending party for Jassi, for he loves to live it up. Till everything goes haywire when the feisty young Tia (Alaya F.) pops out of nowhere in his life, claiming he is her father. Indeed, DNA tests prove the fact too. It turns out she is the love child he conceived nearly two decades ago with a woman (Tabu) who is a hippie of sorts. Even as Jassi is learning to deal with those facts, Tia throws a second bouncer. She announces she is pregnant.

“Jawaani Jaaneman” is primarily meant to work as feel-good fun film that delves into the subject of generation gap without getting too heavy about it. Kakkar’s treatment works well in this context, as it sets up a sweet father-daughter drama riding humour that ably balances witticism and slapstick.

A character-driven plot with well-penned roles makes it easy for a credible cast to score. Tabu and Saif are excellent living out characters that are wholly entertaining and yet rooted in realism. Alaya F. renders a winsome edge to her happy-go-lucky youngster with a rebellious streak. Indeed, the confidence with which she matches the screen presence of seasoned players as Tabu and Saif belies the fact that this is Alaya’s first film. Kubbra Sait, Kumud Mishra and Chunky Pandey are impressive despite limited footage.

An asset as far as characterisation goes are the film’s dialogues. Set to woo GenNow audiences, the lines mouthed by the protagonists render a contemporary feel to the narrative as well as an endearing quality to the characters.

Well, the movie has its warts. For all its cool quotient, the storyline mostly prefers staying within the limits of what’s safe. It picks a few interesting topics as commitment and value of love in the new age, and motherhood for an unwed young woman, but mostly uses these as tools to push forward the story and little else. While the film admirably avoids being judgemental about anything or anyone, it fails to take a stand, too.

The other letdown is music. Bollywood’s newfound reluctance to churn out quality original music continues to baffle. Like almost every Hindi film in recent times, “Jawaani Jaaneman” banks on remixed mediocrity for its highlight songs. For a mainstream comedy that rides the formulae of love and relationships, a solid original score would definitely have been an advantage.

You won’t mind those flaws, though. “Jawaani Jaaneman” is a fun option at the ‘plexes this weekend, packing in some hearty humour, a suitably controlled stock of melodrama and mush, and some fine acting. Overall, a jolly good show. (IANS)