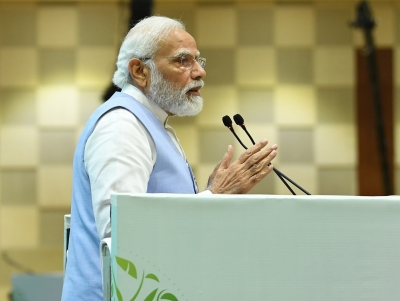 In his inaugural address, Modi said: “We are already witnessing unprecedented growth in the production of Ayush medicines, supplements and cosmetics. In 2014, where the Ayush sector was less than $3 billion, today it has increased to more than $18 billion. An unprecedented efforts has been made in the past years to promote the export of Ayush products.”

Along with first being a special Ayush mark for Ayush products, Modi announced many other initiatives for Ayush sector. A new category named ‘Ayush Aahar’ was announced which will greatly facilitate the producers of herbal nutritional supplements.

Further, another major initiative for foreign nationals who want to come to India to take advantage of Ayush therapy was announced. India will soon introduce a special Ayush visa category.

Describing the current age of the era of unicorns, the Prime Minister informed that in the year 2022 itself, so far 14 start-ups from India have joined the Unicorn Club. “I am sure unicorns will emerge from our Ayush start-ups very soon”, he stated.

The Prime Minister also released a comic book named ‘Professor Ayushman’, which describes how Ayush systems and products helped in fighting not only Covid-19 but other diseases also.

Addressing the session, Tedros said that the Ayush sector is growing significantly — by 17 per cent per year since 2014.

He said that Ayush industry is projected to reach $23 billion by the end of this year.

“We are exploring innovative study designs and the use of artificial intelligence to document the impact of traditional medicine practices, in cases when standard randomised trials are not possible or are difficult to undertake.

“Strengthening the evidence base of traditional medicine should facilitate its use by communities, to promote better health outcomes, economic benefits and overall impact,” he added. (IANS)