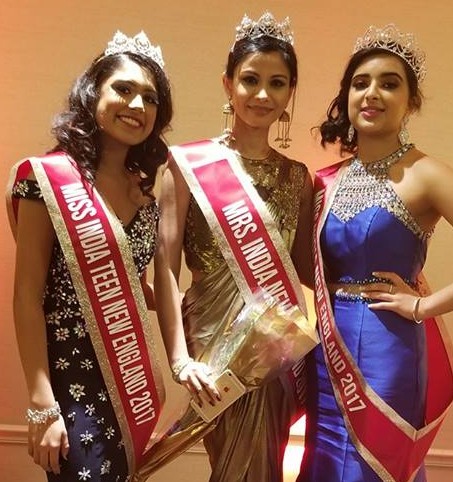 “New England team is getting ready to go to Nationals which will be held in New Jersey from Dec.  15th to Dec 17th,” New England Pageant Director Ruchika Arora said in a statement. “In past five years, many of our New England girls have been placed as finalists and top 3 at nationals, including two International winners from 2014 and 2016- Miss India Worldwide Monica Gill and Mrs. India Worldwide Namita Dodwadkar.”

The New England pageant was held on Dec. 10 at Crown Plaza hotel in Woburn, MA.

Arora said that some amazing talents and faces made their name and proved themselves during 4 rounds of contests that included evening gown, ethnic Indian dress, talent and Q & A.

Winners of the pageant are:

Viewer’s Choice 2017 based on audience voting went to Shalini Kashyap as well.

“This pageant is a unique celebration of Indian culture and heritage in a vibrant atmosphere. The annual show is a glorious evening to watch best of western fashion and exquisite Indian attires and see extraordinary array of talents,” Arora said, adding that for participants it was a moment to fulfill their dreams of catwalk, flowing evening gowns, glorious Indian ensemble, show their talent and a platform to speak and show their wit at on-stage question.