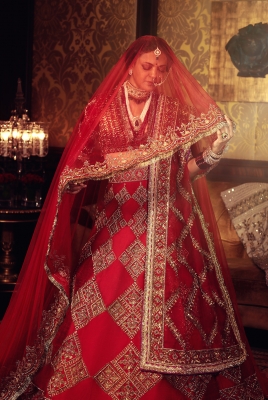 One can’t expect anything less than perfection from a Manish Malhotra production, and the couture film embodied everything the brand stands for. Lehengas in customary bridal reds dominated the collection, soft peaches and lustrous golds finished with Malhotra’s preferred zardozi, badla and sequin embroideries added the glamour quotient. The couture film focused on brides across ages and regions sending an important message to his audience. The film captured many moods of a wholesome Indian wedding celebration and a bride who rather than playing demure, is seen enjoying her big day.

While the ensembles displayed the amalgamation of tradition and modernity beautifully, some designs may not fit the new-age bride. Now more than ever wedding fashion has taken a modern route with pastels and metallics, delicate detailing and practical silhouettes taking centrestage.

Bollywood star Kriti Sanon turned muse for the bridal edit looking radiant in an elaborate lehenga, along with models styled impeccably with polki and floral jewellery. The spectacular setting at the Leela Palace Hotel in New Delhi, old-school wedding music by Hari and Sukhmani, along with and models like Noyonika Chatterjee and Sakshi Sindwani were the other highlights of his showcase.

“My bridal edit is an amalgamation of moods and emotions of the brides and over the years of creating their dream outfits and interacting with them, I inadvertently got drawn into those intriguing memories and decided to capture it all,” added Malhotra. (IANS)