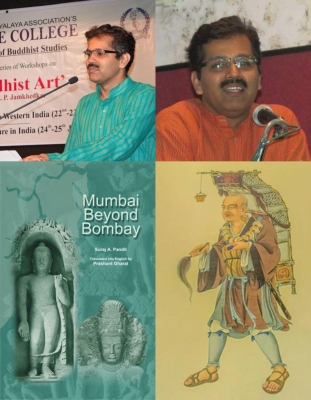 Mumbai– The people of the ancient Maharashtra kingdom were “very warm, friendly and helpful, with high self-esteem”, observed the great Chinese Buddhist monk and wanderer Xuanzang, according to a new book.

The scholar Xuanzang (602-664 AD) travelled in classical India during the 7th century AD, spending around 12 years traversing the length and breadth of the country, according to the new treatise, ‘Mumbai Beyond Bombay’ by historian, scholar and archaeologist Dr Suraj A. Pandit.

“Though he roamed all over the country then, little is known about his journeys in Maharashtra and even the present-day Mumbai Metropolitan Region, which I have researched to bring out several aspects concerning Xuanzang,” Dr Pandit told IANS.

Primarily, he visited India to learn Buddhism and spoke and compared it with Chinese Buddhism during the Harshavardhana Empire of yore.

Among other things during his tour of this western Indian domain, Xuanzang met the King of Maharashtra, Pulakeshin II of the Chalukyas Dynasty of Badami, in modern-day north Karnataka.

“He described the people from this kingdom as ‘very humble, warm, helpful and having a high self-esteem’ when he mingled with even the ordinary folk during his sojourn for an unspecified period here,” Dr Pandit said.

Xuanzang had made Krishnagiri – the modern-day famous Kanheri Caves in Borivali, north-west Mumbai – as his abode during his stay here.

He also journeyed to nearby places like Sopara, the thriving port and capital of the kingdom of Maharashtra – which is today the humble middle-class Nalasopara town in Palghar district.

Dr Pandit said that after the Sopara trip, Xuanzang wrote of what he witnessed there, including a reference to one of the two huge ‘stupas’ built by Emperor Ashoka the Great (who reigned from 268-232 BC), besides the existence of Theravada and Mahayana Buddhist sects in modern-day Mumbai.

“Later, another stupa also came to light and both the stupas still exist in Nalasopara till date. In the past 100 years, we have also discovered the edicts nos. 8-9 of the total 14 edicts proclaimed by Emperor Ashoka of the Maurya dynasty,” Dr Pandit said.

During his travels to India, modern-day Pakistan, Afghanistan, Nepal, Tibet, etc, Xuanzang collected many important manuscripts from India, including some in Sanskrit from the Kingdom of Maharashtra, which he translated into Chinese after returning to his motherland, as per available historical records.

At Krishnagiri (Kanheri), he described the Buddhist monastery atop the hills in great detail, the ‘Viharas’ which were excavated in three layers on the mountain slope with a stone elephant carved out at the main entrance.

Kanheri – which was situated on the huge Salsette Island, into which the 7 islands that comprised the original Bombay were merged by the British – had dense forests teeming with wildlife and tigers roaming in the present-day Malabar Hill area.

Of his stay here, Xuanzang paid glorious tributes to his Acharyas and the Buddhist monks from whom he acquired knowledge and wisdom, Dr Pandit said.

Before leaving Krishnagiri (Kanheri), Xuanzang was presented a wooden statuette of the 11-headed Bodhisattva, Lord Ekadashmukh Avalokiteshvara and a text called Dharini, which he also translated into Chinese.

The statuette later created a sensation in his home country and the later spread of the 11-headed Bodhisattva cult in China can be largely attributed to Xuanzang, Dr Pandit explained.

His recent book ‘Mumbai Beyond Bombay’ is translated from Marathi to English by young archaeologist Prashant Gharat and published jointly by Aprant and Centre for Archaeology, University of Mumbai.