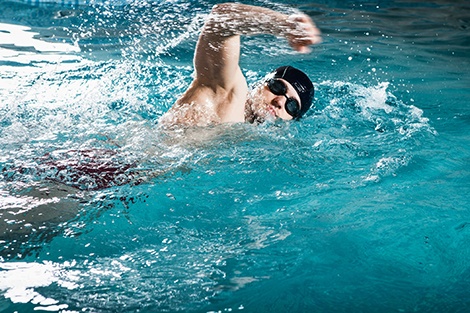 CAMBRIDGE, MA –Prostate cancer is among the most common forms of cancer affecting men today. In 2018, more than 1.2 million new cases will be diagnosed globally, according to the International Agency for Research on Cancer. While the burden of the disease is staggering, new research led by Harvard T.H. Chan School of Public Health suggests that a modifiable lifestyle factor may help reduce the risk: exercise.

Researchers have long suspected that physical activity, and its influence on a wide range of biological processes including anti-inflammatory and insulin pathways, may be linked to a lower risk of prostate cancer. But findings from large epidemiologic studies so far have been mixed—some have shown an association, some haven’t.

To bring a fresh approach to the question, scientists from Harvard Chan School analyzed data from 49,160 men between the ages of 40 and 75 who enrolled in The Health Professionals Follow-up Study in 1986 and were followed to 2012. The men responded to biennial questionnaires that included questions about diet, health, and physical activity. Among the participants, 6,411 developed prostate cancer and 888 developed a lethal form of the disease.

The study, which was published this month in European Urology, showed that men who engaged most frequently in vigorous activity over the length of the study had a 30% lower risk of developing advanced prostate cancer and 25% lower risk of developing lethal prostate cancer when compared with men who exercised the least. On average, men in the highest category of vigorous activity engaged in an equivalent of 25 minutes of running daily. Vigorous activity for this study included activities such as bicycling, swimming, heavy outdoor work, and playing sports such as tennis or racquetball.

“In addition to other well-known health benefits of a physically active lifestyle, this study emphasizes that prostate cancer prevention may be another important reason for men to move more and be active,” said Claire Pernar, lead author of the study and a postdoctoral research fellow at Harvard Chan School.

In addition to being one of the largest of its kind, the study stands out in that researchers were able to examine medical records, pathology reports, and disease-specific questionnaires, and to leverage molecular subtyping data—information that lets researchers classify types of cancer based on molecular and clinical characteristics—to better understand how prostate cancer develops.

In particular, the study homed in on a common molecular alteration in prostate tumors called TMPRSS2:ERG, a gene fusion that occurs in the tumors of about 50% of prostate cancer patients. The study showed for the first time that long-term vigorous physical activity was specifically associated with a lower risk of developing TMPRSS2:ERG-positive prostate cancers.

“Our results on physical activity and TMPRSS2:ERG highlight a concept of ‘precision prevention,’  or the idea that patients can take specific actions to reduce the risk of certain cancers, and show the diversity that seems to exist among the possible causes of prostate cancer,” said senior author Lorelei Mucci, associate professor of epidemiology. “Prostate cancers that contain TMPRSS2:ERG seem to be sensitive to insulin, growth factors, and other metabolic factors, which may help explain the link between physical activity and this prostate cancer subtype.”

Mucci was also part of a team that had another paper published this month in European Urology that found screening for prostate cancer in midlife strongly predicted subsequent diagnosis of total and aggressive prostate cancer in black men.