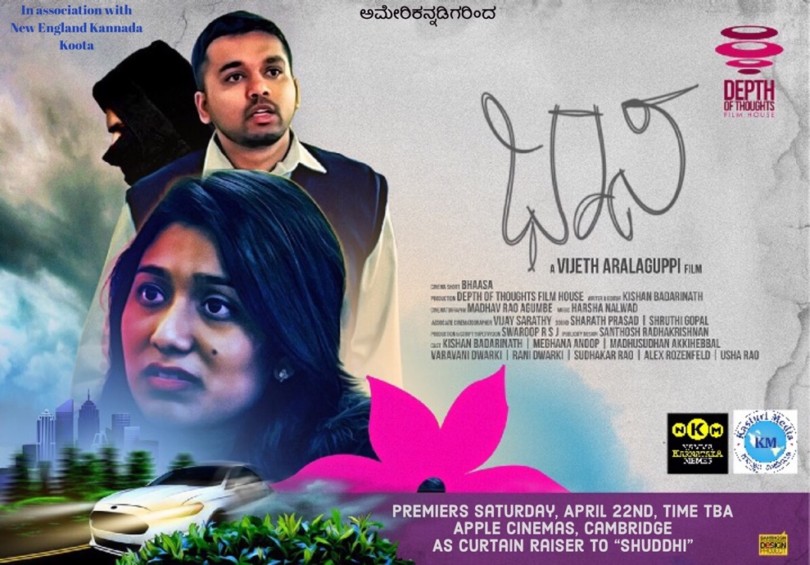 CAMBRIDGE, MA–Bhaasa, a locally produced Kannada short movie will premier on Saturday, April 22, at Apple Cinemas in Cambridge, MA. The film is sub-titled in English, and this language is not a barrier, organizers of the film said in a statement.

The team behind the Kannada short film called ‘Bhaasa’ (which translates to ‘feel’ or ‘to experience’), consisting of talents in and around the New England area. Most of the cast and crew are part of Mandaara New England Kannada Koota (NEKK), who happen to have met each other during the association’s cultural events.

The short has been filmed in Rhode Island and Massachusetts and resources required for the film were pooled in through the organization. The team did meticulous planning for almost 3 months before going on floors. This helped them to tell their story within budget and using available resources.

“While making a short film is in itself a task, what is further challenging is to get an audience to watch it. With the abundance of short films in YouTube and Facebook, it is getting tougher for short film makers to get their audience’s attention,” the statement said. “In this angle, the team has taken a creative step. They have tied up with the Kannada feature film distribution company called “Kasturi Media” to get their films screened as curtain raiser to feature films which the company screens across multiplexes.”

First such screening is scheduled to happen on Saturday, April 22 at a multiplex in Cambridge, MA. The team also plans to have such screenings in Chicago and San Jose in the coming days. The film is also participating in the upcoming short film festivals.

This short film is a drama dealing with an interesting aspect of Indian weddings that is often neglected and taken for granted. It is directed by Vijeth Aralaguppi, who has been associated with the release of Kannada feature films in Boston for a couple of years.

The film is produced by ‘Depth of Thoughts Film House’, a small production group. Kishan Badarinath has written and edited the film and also plays the male lead, while Meghana Anoop is the female lead. Madhav Rao Agumbe has donned the camera, assisted by Vijaya Sarathy. The film was shot on sync sound, handled aesthetically by Sharath Prasad and Shruthi Gopal. Harsha Nalwad, a Bengaluru based composer, has scored the original music for the short. Swaroop RSJ has managed the production.

The rest of the cast include Varavani Dwarki, Rani Dwarki, Sudhakara Rao, Usha Rao, Madhusudhan Akkihebbal, Alex Rozenfeld who are all well-known names within the NEKK association.