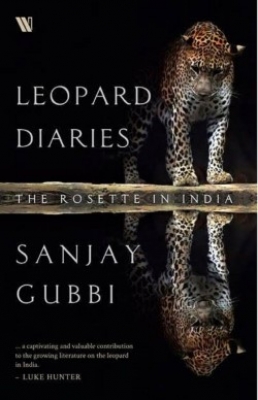 New Delhi– The leopard is the reigning rock star of the wildlife world. It’s a species that is obscure and largely overshadowed by the tiger, especially in India, scientist, conservationist and author Sanjay Gubbi writes in “Leopard Diaries”.

However, it is also a species that is loved by some and hated by many others. Nearly buried in this cacophony of conflict lies the “remarkable story” of this “lonely, mysterious creature” that he explores.

“Wildlife science hardly reaches anyone except those who are into serious academics. Furthermore, the common man or decision-makers do not understand the language jargon and the complicated statistical procedures of scientific papers. In addition, these papers are mostly behind the iron wall of paid subscriptions. In such a scenario we must reach and popularise wildlife conservation through popular media such as books and articles.

“There is quite a bit of popular literature on tigers but very little on leopards despite the species losing its habitat on a fast track. So the best way to bring both science and applied conservation is possible through a book” that is sub-titled “The Rosette in India” and has been published by Westland, Gubbi told IANS in an interview.

To this end, the book has in-depth information about understanding this spotted cats’ population, its distribution and human-leopard conflict issues based on his research work in Karnataka – and also has information based on literature reviews about leopards from across its distributional range.

“But to give a bigger picture, to draw the attention and interest beyond leopard ecology I had to fish anecdotes from my experiences about the enchanting habitat it lives in, the interesting people within that landscape, the different species leopards co-exist with, and other curious aspects,” Gubbi, who holds a doctorate in leopard ecology and conservation, explained.

He is the winner of the Whitley Award (popularly known as the Green Oscars) in 2017, and is also the recipient of the first Co-existence Award 2019 by the Prince of Wales and the Duchess of Cornwall, and the Carl Zeiss Conservation Award, among others.

Vis-a-vis the tiger, are the steps being taken for the conservation of leopards adequate?

“It certainly does not match anywhere close to what the tigers draw. Of course, the tiger numbers are much much lower than leopards (2,967/12,852), their habitat requirements are much larger, hence it is fair that it gets that attention. But we also need to focus on species like the leopard as they are key wildlife beyond forest habitats such as the rocky outcrops, scrub forests. They also define the public opinion towards wildlife conservation as they are highly conflict-prone,” Gubbi pointed out.

What are the lacunae and how can these be addressed?

“We need to focus a lot on protecting leopard habitats and their prey, especially outside the protected area network. Our research showed that prey poaching is seven times higher in non-protected areas and (where) the populations of large prey like chital, sambar, barking deer is 90 per cent lower.

“This calls for urgent attention if we are going to conserve leopards at the landscape level. Similarly, we are losing their habitats at unprecedented levels. Both these factors have led to high levels of human-leopard conflict the cost of which is borne by poor rural communities. Very importantly we need to bring down conflict to tolerable limits. The future of wildlife conservation in India hinges on this,” Gubbi maintained.

Thus, his research goal was to collect the best possible data on leopard ecology and to apply the data to leopard conservation and he decided to do so even amidst the political difficulties of working on large carnivores functioning in a landscape where hegemony was already established. Leopards are territorial and so are those studying them.

“My interest was not to master leopards but to slowly interpret their life to help contribute to their conservation, especially through conflict mitigation strategies. I have strongly felt that research should be more than a quest for facts. I don’t want to merely leave records of the animals going extinct for our children to read. I am more interested in our children actually being able to see these animals,” Gubbi writes in the book.

As George Schaller, an American large mammal biologist says, “A researcher today also has a moral responsibility to help the species endure’, we can “endlessly describe a species, but we need to help the species persist. Information is key but so is emotion,” Gubbi writes.

“The journey with the leopard was not intended to produce a guide to lead others and state how it is in the leopard world.

“This is not a manual on how to conserve leopards but a log of my journeys and observations. It records my experiences with the people I met, and the results of our study on this wonderful cat. We also have to recognise that there are things we cannot understand about leopards, or for that matter about any wild species.

“Leopards possess qualities and abilities well beyond the means of science to decipher. We have interpreted a little about this species. But nature knows a lot more. And we will never know many secrets of this spotted cat. Science has only been nibbling at the furtive biological facts of many wildlife species, and most of it remains to be understood. Our work added just another brick to this large world of ecology and conservation,” Gubbi writes.

He concludes the book with the fervent hope that in the 22nd century “we find as many leopards roaming this country as we do today. However, this needs involvement and fuelling conservation not merely through science but through on-ground efforts by ecologists, wildlife enthusiasts, photographers, filmmakers, media personnel and everyone keenly interested in saving nature. Science is like the tangier delights of food, adding variety and flavour to the diet, while conservation is like cod liver oil, essential for sustenance and building strength”.

“Much like poetry, in conservation what matters is saying what we see, and the need of the hour is that we speak up about the threats these graceful cats face.

Many questions related to leopards remain unanswered to this day. We know only a thing or two about these graceful cats. If our work and this book contribute even a nickel’s worth to help conserve this felid species, my team and I would be delighted.” (IANS)