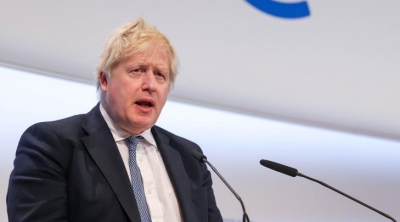 London– Boris Johnson’s first visit to India as Britain’s Prime Minister — twice postponed because of Covid — is at last scheduled on the anvil for April 21-22.

“My visit to India”, he said, “will deliver on the things that really matter to the people of both our nations – from job creation and economic growth, to energy security and defence.”

Johnson’s is no stranger to India. He was married to a half-Indian barrister — Marina Wheeler — for 25 years and undertook trips to India often for family occasions. He also went to India as Mayor of London and the UK’s Foreign Secretary. This, though, is his first sojourn since Britain formally exited the European Union (EU) as a member state at the end of 2020.

The EU accounted for over 50 per cent of the UK’s total exports. Data put out by the UK’s Office of National Statistics (ONS) underlined the country’s exports to the EU fell by 20 billion pounds last year – the first year post-Brexit – compared with 2018 – treated as a base year. Clothing exports plunged 60 per cent, vegetables were down 40 per cent and cars 25 per cent. Exports to the rest of the world dropped by 10 billion pounds, thereby emphasising the importance of the UK-EU trade relationship, which Brexiteers like Johnson spurned and are now desperate to compensate, notwithstanding the fact that there is a recovery from January 2021 – month on month – when UK exports to the EU collapsed by 40 per cent.

Britain obtained a Comprehensive Economic Partnership with Japan in 2020. However, free access to the big market of the US has been rebuffed by the current American administration of President Joe Biden, regardless of Britain’s enthusiasm for it. It has, thus, turned to India, among other countries, to make up for the decline in exports to the EU.

Consequently, Johnson is perceived to be arriving in India with a relatively weak hand, keen to increase British exports to India and to induce Indian companies to invest in the UK. The British government, however, visualises India to be in vulnerable circumstances, with China posing a military threat its borders, and the Indian economy having gone pear shaped, including exports struggling to move upwards.

Johnson’s office at 10 Downing Street stated: “He will use the visit to drive progress in the Free Trade Agreement negotiations launched earlier this year – a deal with India is predicted to boost our total trade by up to 28 billion pounds annually by 2035 and increase incomes across the UK by up to 3 billion pounds.”

The FTA aimed at will be selective rather than comprehensive, with a target to conclude it by the first quarter of 2024, or before general elections in spring of that year in both countries. ‘Data, Fintech and Information Technology,’ will be the key focus, a source disclosed.

A year ago, Johnson and his Indian counterpart Narendra Modi agreed a UK-India Comprehensive Strategic Partnership. Following this, the former announced a 530 million pounds Indian investment in Britain arising out of this, including vaccine maker Serum Institute of India setting up shop in Britain. Downing Street was asked how much of this inflow has materialised so far. It failed to provide an answer. However, the PM office indicated: “Investment from Indian companies already supports 95,000 jobs across the UK.” Much of such employment is generated by the Tatas, among who interests are Tata Steel, Jaguar Land Rover and Tata Consultancy Services (TCS).

Johnson will be heading for Modi’s home state of Gujarat first. Here on April 21, he will “meet with the leading businesses”. It will be the first time a UK Prime Minister will be setting foot in the state. The purpose is seen in informed circles in Britain as being as much political as anything else, since about half of the British Indian population in the UK are estimated to be of Gujarati origin.

On April 22, his talks with Modi in Delhi will cover bilateral cooperation in defence and diplomatic affairs. Rahul Roy-Chowdhury, senior fellow at the International Instutute for Strategic Studies (IISS) in London, commented: “Defence has been an ‘under-performer’. From several decades ago when the UK was the largest source of arms for India, its share today of is less than 3 per cent of India’s defence.”

As for the political aspect of diplomatic ties, there has rarely been a convergence between the two country in the 75 years since Indian independence from Britain. Presently, the UK is gung-ho about siding militarily with Ukraine in its face-off with Russia, whereas India, despite unprecedentedly tilting towards the US under Modi, has reverted to Jawaharlal Nehru’s policy of non-alignment on Russia-US conflicts, which the hostilities in Ukraine are seen to be. (IANS)