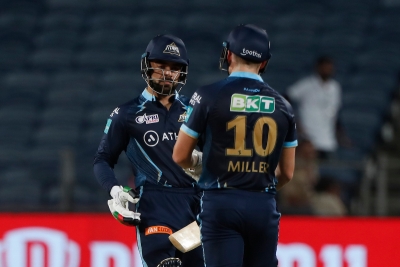 Miller, who led the chase with an unbeaten 94 off 51 balls, shared a match-winning partnership of 70 off just 37 balls with Khan, who dished out a 21-ball 40 cameo to turn the match in Gujarat’s favour. The win means that Gujarat, who entered the match in absence of regular captain Hardik Pandya and were in spots of trouble at 16/3 and 87/5, maintained their top spot in the points table.

“The way Miller was clearly striking the ball; he even held the bat a bit higher. He has a different grip and a clean bat swing. If Miller’s good phase continues, then he’s a very dangerous player, which he showed today. When a batter is slogging, he will only hit hard towards mid-wicket. But if you see, Miller plays good shots through the covers, which means the batter is in full control,” said Tendulkar on his official YouTube channel.

Giving Miller the required support from the other end was stand-in captain Khan, who was at eight off 12 balls before smacking Chris Jordan for three sixes and a four on first four balls of the 18th over to turn the match in Gujarat’s favour.

“Rashid wasn’t too far behind. If a batter is playing well, he needs support from the other end as well. Rashid played a fantastic role as he batted with a strike rate of 200. And in the 18th over, he scored 25 runs of Chris Jordan’s bowling, which changed the momentum of the match,” observed Tendulkar.

Tendulkar, currently serving as mentor for Mumbai Indians, signed off by saying that Chennai all-rounder Shivam Dube could have gone for the full attack to take Miller’s catch off Dwayne Bravo in the 17th over.

At that time, Miller was batting on 78 and had mistimed a pull shot. He didn’t get the elevation and one felt that Dube, at deep mid-wicket, could have taken the catch.

Dube went running in but didn’t attempt for taking the catch, maybe due to losing the sight of the ball due to crowd or floodlights in the stadium, leaving Bravo livid and captain Ravindra Jadeja threw his cap down in anger.

“Before that, there was a half-chance off Bravo by Miller when he hit it towards mid-wicket and Shivam Dube could have tried a bit harder. Overall, Gujarat played a fantastic game of cricket. Well done to Miller and Rashid.”

Gujarat’s next match in IPL 2022 will be against Kolkata Knight Riders at the DY Patil Stadium on Saturday, April 23. (IANS)